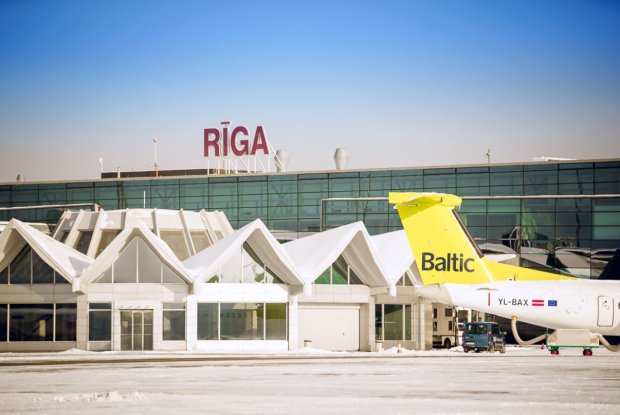 The second rapid-exit taxiway, built with the support of the Cohesion Fund, has been put into operation at Riga Airport. The renovation of a part of the runway at the Airport's own expense has also been completed.

The large-scale construction works began last summer. Within the framework of the Cohesion Fund project “Development of Secure and Environmentally Friendly Infrastructure at Riga International Airport”, a second rapid-exit taxiway has been built at Riga Airport. Thus, the movement of aircraft to and from the runway and in the taxiing area will be shortened, significantly reducing the time and fuel consumed in land manoeuvres, which in turn will reduce CO2 emissions at Riga Airport. The total amount of construction works is 2.5 million euros.

Video insight into the construction process is available here:

In turn, the asphalt pavement of the aerodrome infrastructure was changed in a total length of 5.7 kilometres – 5 kilometres for the runway shoulders in a width of more than 7 metres and for a separate section of 660 metres across the entire runway width. The construction works also included the construction of drainage systems and rainwater sewerage system, as well as the renovation of the runway lighting system, the application of horizontal markings and the landscaping of the territory. The total cost of the project is 4.5 million euros.

Laila Odiņa, Chairperson of the Board of Riga International Airport: “The large-scale Airport infrastructure development projects implemented with the support of the Cohesion Fund are an important step towards the development of Riga Airport into a sustainable and environmentally friendly air traffic hub. They will not only reduce the direct impact of Airport operations on the environment by shortening ground manoeuvres and thus reducing CO2 emissions, but will also make the Airport's operational processes more efficient.”

The works were performed by the road construction company SIA “Binders” selected as a result of the tender.

The works were carried out in a specific work organization regime, as the main condition of the extensive construction works was not to cause interruptions or other obstacles to aerodrome operations. Therefore, all technological processes of construction works in the territory of the aerodrome took place at night, between flights.

Aigars Sēja, Chairman of the Board of SIA Binders: “For the builders, the implementation of this project was a complicated, challenging process. The construction works took place at night in that area of the aerodrome, which was used by aircraft in daytime. We had an extremely strict schedule, observing the rule that the area where the construction works were performed at night had to be vacated in the morning in order to be used by aircraft. Very accurate logistics had to be implemented for the supply of human resources, machinery and materials, and a different system of execution of technological processes had to be organized than that usually used for road construction works. Many intermediate processes on the roads were carried out at the Airport in one go at night, such as removing the old runway surface and laying a new surface. It was not only the reconstruction of the existing infrastructure that was carried out according to this principle; it also applied to the construction of the new taxiway.”

It has already been reported that these projects were supplemented with the construction of a new cargo apron and helipad; with the support of the Cohesion Fund, taxiways will continue to be equipped with centreline lights, which is a precondition for introducing an innovative “follow the green” aircraft management system.

In its turn, the project activity, which provides the reconstruction of the rainwater drainage system of the public territory and Muzeja Street, includes the construction of environmental accessibility solutions, as well as the arrangement of the rainwater drainage system, improvement of traffic safety and reduction of pollutant emissions. Implementation of the project will prevent the landside areas from being flooded in heavy rain.

In addition to the above-mentioned, it is also planned to improve civil aviation security at the Airport by purchasing the latest generation explosives detection system equipment with the con-financing of the CF “Development of Secure and Environmentally Friendly Infrastructure at Riga International Airport”.

The support for Airport modernisation is planned within the framework of the planning document Priority Axis “Sustainable Transportation System” Specific Objective 6.1.2 “To Promote Security and Compliance with Environmental Requirements at Riga International Airport”. On 27 December 2016, Riga Airport signed an agreement with the Central Finance and Contracting Agency (CFLA) on the receipt of the funding of the Cohesion Fund for the project “Development of Secure and Environmentally Friendly Infrastructure at Riga International Airport” (Project No. 6.1.2.0/16/I/001); on 3 July 2017, a positive decision was received from the European Commission regarding the state aid notification of the project.

The total eligible funding of the Cohesion Fund project “Development of Secure and Environmentally Friendly Infrastructure at Riga International Airport” is EUR 23 049 010, including Cohesion Fund funding of EUR 10 774 241 EUR and Riga Airport funding of at least EUR 11 564 245.