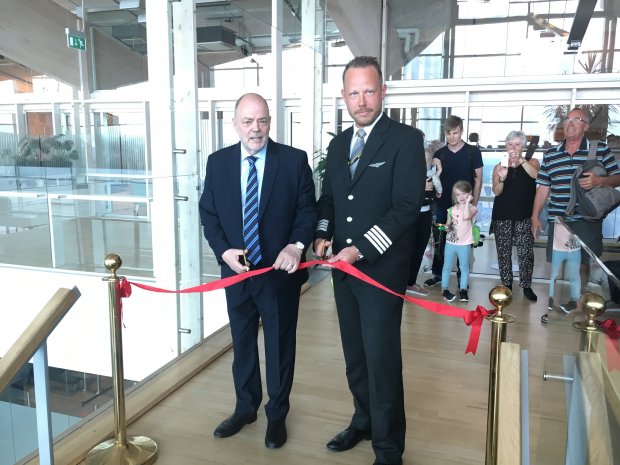 On May 10th the new summer route between Aalborg and Athens was officially opened with a traditional cutting of the red ribbon and a water cannon salute for the aircraft.

On Thursday, May 10th, travelers could for the first time fly to the Greek capital, Athens - directly from Aalborg Airport. It was celebrated with an official route opening where passengers were welcomed with coffee, cake and bubbles. Right before departure the red ribbon was traditionally cut by airport director Søren Svendsen, and joining him was the captain of the Primera Air plane, Nikolas Pagaard. Heading for take-off the passengers experienced the water cannon salute from inside the aircraft.

- It is the first time ever that we can present a direct route to Athens from Aalborg Airport, wherefore it is a big day in the 80-year history of the airport. The route to Athens opens up for new holiday opportunities for the Danes. They can combine a shopping and historic getaway with relaxation on the beach or exotic island-hop around the Greek islands. It is a unique way to spend a holdiday which we are pleased to offer from Aalborg Airport, says Søren Svendsen, director of the airport.

The direct route between Aalborg and Athens is operated by the airline Primera Air every Thursday until October 11th. Besides being able to buy flight-only tickets, the travel agency Bravo Tours also offers charter holidays to Athens and the amazing holiday areas of Loutraki, Tolo / Nafplio and Attica, which, like the mainland of Greece, offer true Greek holiday atmosphere and relaxation.