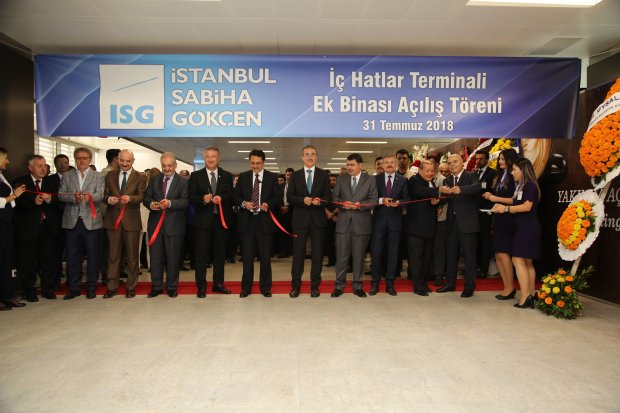 Istanbul Sabiha Gökçen International Airport, the second largest airport of Turkey, has completed the construction of an additional building for its domestic terminal on its tenth anniversary. The new domestic terminal building, which cost EUR 26 million, will increase the annual passenger capacity of the airport from 33 to 41 million.

Speaking at the opening ceremony, İSG CEO Ersel Göral stated that, in addition to the terminal, they were also operating the airport’s parking lots, cargo facilities, general aviation center, and hotel facilities, and added that during their ten-year history, they had taken major steps towards meeting the evolving needs of the rapidly growing tourism industry. Göral said: “For seven consecutive years between 2009 and 2016, we were chosen Europe’s fastest-growing airport in terms of number of passengers. We received numerous awards during the last ten years. Last year, we ranked 8th among the most punctual airports of the world with an on-time performance of 82.3%, making us the only Turkish airport among the top ten. This year, we served 33 million passengers, representing a 9-fold growth over the last ten years. Looking at this year’s figures, we achieved double-digit growth during the first half of the year. The number of passengers using Sabiha Gökçen Airport increased from 14.4 million in January-June 2017, to 16.2 million in January-June 2018. This represents a 12% increase over the last six months of the year. Passengers on international flights increased 13%, to 5.2 million compared to last year. Similarly, passengers on domestic flights increased 12%, to 11 million. During the same period, the number of aircraft that took off from or landed at the airport increased 7%, to 106,631. Sabiha Gökçen International Airport was used by 2.8 million passengers in June 2018 alone. Passenger volume increased 9% in June compared to the same period last year. International passenger volume increased 12%, while domestic passenger volume increased 8%.”

Stating that the EUR 26 million new terminal building was the first link in the chain of investment projects launched by İSG on its tenth anniversary, Göral said: “İSG has so far invested around EUR 500 million in this airport. The second runway, which is being built by the State Airports Administration (DHMİ) for USD 550 million is expected to become operational by the end of this year. As of 2019, Sabiha Gökçen will be an airport with two runways, a total capacity of 80 flights per hour, and an annual capacity of 41 million passengers. The new subway line planned to be completed at the beginning of next year will provide direct connection between Istanbul Sabiha Gökçen Airport and the Pendik-Kadıköy subway line. This represents a major advantage for us: A passenger who leaves the airport will arrive in Kadıköy in 35 minutes, and in Taksim in 45 minutes. We will do our best to further improve our services, set even more ambitious targets, and achieve sustainable growth.”

Speaking at the opening ceremony, ISG Board Chairman & MAHB Board Member Dato Izani Ghani said: “At a strategic location that connects Asia and Europe, Istanbul Sabiha Gökçen International Airport hosted 31.2 million passengers in 2017. As a destination preferred by the likes of Emirates, Qatar Airways, Fly Dubai, and Air Arabia, and also a hub for both Turkish Airlines and Pegasus to fly to more and more destinations, the airport keeps expanding its scope in Europe, the Middle East and Africa.

With the completion of the second runway, which is a major investment for Istanbul Sabiha Gökçen, we expect to double the capacity of the airport.

Furthermore, once the construction of the metro line is completed, Sabiha Gökçen will take a major step towards becoming a city airport.

As a significant asset for the Turkish economy, Istanbul Sabiha Gökçen Airport continuously and successfully fulfill its role by contributing into the tourism, transportation and civil aviation sectors of the country. Therefore, in line with our group’s, Malaysia Airports Holdings Berhad’s international growth strategy, we will continue to reap the benefits of our investments in Sabiha Gökçen as the airport continues its organic growth in the upcoming future.

Sabiha Gökçen, with its excellent potential, will continue to play an important role in our group’s overall performance.”

Speaking at the ceremony, Istanbul Governor Vasip Şahin said: “This was a rather inactive airport until recently. Today, this airport is investing all its resources in capacity expansion. The initial target was 25 million passengers, it has already reached 31 million, and now it’s being expanded to 41 million. With the completion of the second runway, capacity will reach 63 million.”

“has written AnadoluJet launches a new international route from SAW”