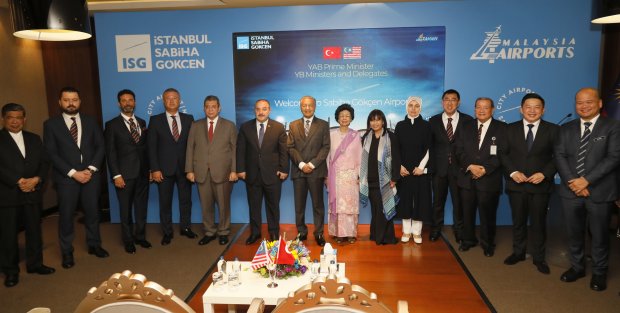 The Prime Minister, who was on four-day official visit to Turkey flew in from Ankara on the third day of his visit to Turkey accompanied by HE Dato’ Abdul Razak Abdul Wahab, Malaysian Ambassador to Turkey. On hand to receive the Prime Minister were YB Datuk Saifuddin Abdullah, Minister of Foreign Affairs; YB Darell Leiking, Minister of International, Trade & Industry; YB Mohamad Sabu, Minister of Defence; Tan Sri Datuk Zainun Ali, Chairman of Malaysia Airports; Datuk Shahril Ridza, Managing Director of Khazanah Nasional; Raja Azmi Raja Nazuddin, Group CEO of Malaysia Airports; ISGIA management team and and representatives of the Turkish authorities. During the visit, the Prime Minister was given a briefing on the operations and growth potential of ISGIA and was brought to view the recently completed domestic boarding hall expansion.

Malaysia Airports’ involvement in ISGIA started in 2008 when together with its consortium partners, it was awarded the concession to operate the airport for 20 + 4 years. By 2014, the airport operator had acquired 100% stake in ISGIA, making it one of the world’s largest airport operator group in terms of passenger numbers. ISGIA is the second largest airport in Turkey and is the world’s busiest single runway and terminal.  In 2018, ISGIA registered a total of 34.1 million passenger traffic movements and revenue of RM1,154.1 million. As at June this year, the airport registered 16.7 million passenger traffic movements, rising a further 3.4% from the same period last year.

With its long-term growth potential, the airport is a strategic investment for Malaysia Airports. In 2018, ISGIA was the second fastest growing airport in Europe within its category of above 30 million passengers per annum (mppa).  It is currently the 12th busiest airport in Europe surpassing Zurich, Manchester, Stansted, Dublin and Berlin.

Its location presents a geographic advantage as it is able to capture the India, Middle East and Africa (IMEA) market. Even with the opening of the new Istanbul Airport, ISGIA continue to play a prominent role as a city airport as its location is closer to downtown Istanbul and serves a larger catchment area as it is located on the Asian side of Istanbul where the majority of the population live. ISGIA also offers easy access to passengers via a direct link to the Trans-European Motorway. Besides private cars, multiple options are also available to travellers via intermodal transport which includes taxis, car rentals, public and private buses, sea buses and trains. It is also a hub for Turkey’s largest carriers i.e. Pegasus Airlines and Turkish Airlines. It has 56 other airlines operating from the airport serving 38 domestic and 108 international destinations.

With the recently completed boarding hall expansion, the airport’s capacity has increased to 41 mppa from 33 mppa previously.  The Turkish government is also in the midst of constructing a second runway at the airport which is due to complete by 2020 and is expected to double ISG’s airside capacity. The future for ISGIA remains bright, as together with KL International Airport, both airports have the potential to provide a game-changing opportunity as hubs for Islamic connectivity for Europe and Asia Pacific. Currently Malaysia is the number one global Islamic economy for the fifth year running and KLIA is the preferred hub into Saudi Arabia for Indonesia’s 220 million population. Meanwhile, Turkey is among the world’s top three destinations for halal travel and ISGIA is able to provide direct access for Turkey’s 80 million population and the rest of Europe into Saudi Arabia.

“has written COVID-19 “will dictate the practice of social distancing, better hygiene at airports, and technology-driven passenger processing””