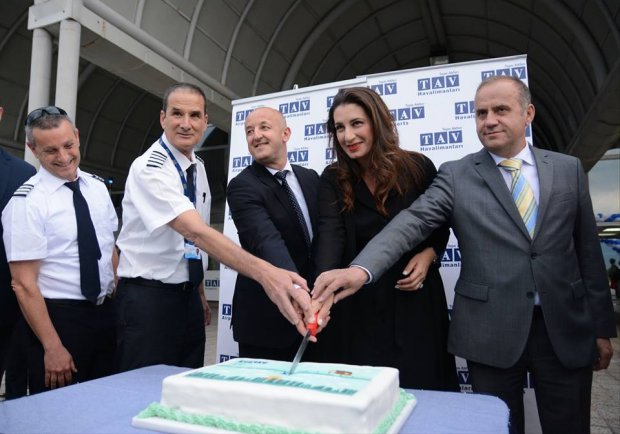 The first charter flight from Tel Aviv to Ohrid Airport St. Paul the Apostle landed tonight. It is expected that in the period from June to October, the Israeli airline ARKIA to bring in Ohrid more than 5.000 tourists from Israel

With the water-bridge as a greeting to the aircraft, cutting cake ceremony, and traditional Macedonian welcome snacks, TAV Macedonia at Ohrid Airport St. Paul the Apostle, welcomed the first group of 110 Israeli tourists from Tel Aviv that arrived with charter flight by Israeli airline Arkia.

In TAV Macedonia say they are satisfied that these charter flights that were announced last year are beginning to realize, as a result of the activities of TAV Holding from Istanbul to attract new airlines and tour operators at Ohrid Airport.

With the first flight of the airline Arkia to Ohrid, opened was new tourist corridor between Israel and Macedonia, a chance esteemed guests from Israel to learn about the natural beauty of Lake Ohrid and Macedonia in general, and with the cultural sights, as we often know to say, of Macedonian Jerusalem.  Of course there is the possibility to taste Macedonian food and wines, and to experience the hospitality and kindness of our people, stated Zoran Krstevski, General Manager of TAV Macedonia.

From the airport operator explained that starting as of today, June 9th, Arkia will fly three times a week flying from Tel Aviv to Ohrid and back, until October 23rd, on Tuesdays, Thursdays and Sundays.

From TAV Macedonia said that this summer at Airport St. Paul the Apostle are expected to arrive 50 charter flights from Tel Aviv with Arkia airline, which in the period from June to October in Ohrid should bring 5.500 Israeli tourists.

On behalf of Arkia I'm honoured to be here today with the first group of Israeli tourists to beautiful Macedonia. As the second biggest airline and one of the main tour operators in the country, Arkia is always looking for new holiday destinations for the Israeli market, and we do believe that Macedonia, with all the wealth in nature, history, gastronomy and on top of all lovely people, will be in a short while one of the Israeli's preferred holiday destinations. Arkia is thankful to the airport authorities and the local tourist board for  the lovely welcome and for the help and support in establishing the route between Tel Aviv to Ohrid, said Anat Aharom, vice-president of Sales and Marketing at Arkia International.

Arkia first flew to Ohrid Airport in 2011, but then were realized only a few flights.  From the management of TAV Macedonia expect the renewed cooperation with the Israeli airline to continue in the coming years, regularly carrying Israeli tourists in Macedonia's tourism pearl - Ohrid.

With these charter flights from Tel Aviv, with the new line from Belgrade-Ohrid and the new charter flight Brussels-Ohrid, which will soon start from St. Paul the Apostle, as well as the regular summer charter flights from Amsterdam and three regular flights to London, Basel and Zurich, the airport operator expects revival of St. Paul the Apostle, and increased traffic will contribute for more tourists to visit Ohrid, but also many citizens of Ohrid-Struga region and the wider area of southwestern Macedonia to fly abroad.

The trend of increased traffic continues this year. In the first five months of 2016 through two Macedonian airports were transported 648.745 passengers, which is an increase of 28% compared to the same period in 2015.  At the same time, the number of operations (landings and take-offs) at the two airports increased by 16%.