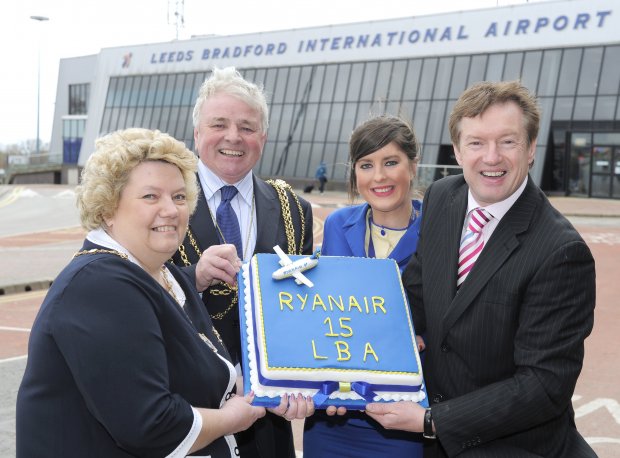 Ryanair commenced operations from LBA in 1996 with just a single route from LBA to Dublin. This was used regularly by the Dublin born Lord Mayor to visit friends and family.

Since then the airline’s relationship with LBA has gone from strength to strength and culminated in the announcement early last year that the airport would become Ryanair’s latest base, with two aircraft and an investment worth over $140 million in the airport.

At a lunch hosted by Leeds, York and North Yorkshire Chamber of Commerce last week Ryanair’s CEO, Michael O’Leary, launched the airline’s winter 2011/12 schedule which offers passengers 11 routes, including the extension of their popular Lanzarote destination to the winter schedule.

Tony Hallwood, Commercial Director of Leeds Bradford Airport, said, “We are pleased Ryanair has reached this landmark figure at Yorkshire's gateway airport and that the Lord Mayor of Leeds could join us in these celebrations. As well as providing low cost flights to popular destinations in Europe, Ryanair's route network is also attracting a significant number of inbound leisure and business visitors into the region which provides excellent benefits for the local economy.”

Ryanair’s Maria Macken said “Ryanair is delighted to celebrate its 15th birthday at Leeds Bradford Airport.  Since Ryanair commenced operations at the airport in 1996 with one route to Dublin we have gone from strength to strength and now offer a choice of 21 routes to/from Leeds Bradford including Alicante, Limoges , Knock & Nantes.”