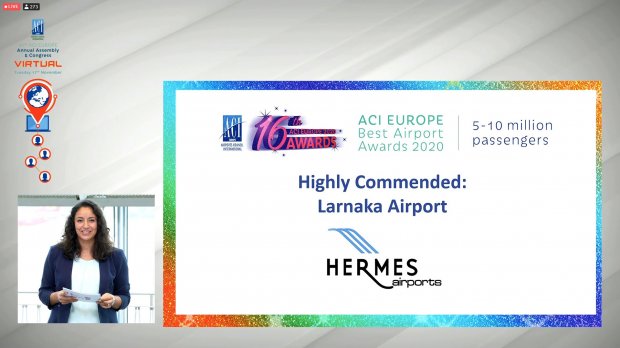 Larnaka International Airport has received another important accolade during the 30th Annual Congress and General Assembly of the Airports Council International (ACI Europe), as it was highly commended in the category 5-10 million passengers at the Best Airport Awards 2020. The airports were evaluated based on their performance, agility, and results in a newly created environment as a result of the pandemic.

The Chief Executive Officer of Hermes Airports Eleni Kaloyirou stated “The fact that a highly respected international panel of experts ranks Larnaka Airport amongst the best in Europe is an honour. This acknowledgment is very significant during such difficult times. It is a recognition which affirms the high level of services whilst at the same time reflects our commitment in preserving the safety of our staff and passengers.”