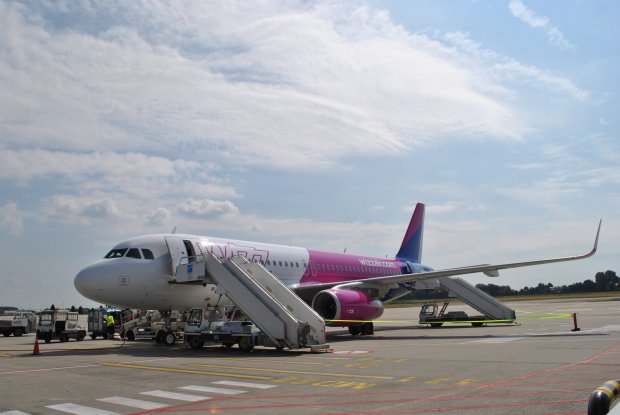 Charleroi, 30 May 2016 – Wizz Air, the Hungarian airline, is celebrating its 12th birthday. Founded in 2003, Wizz Air operated its first commercial flight on 19 May 2004, departing from Katowice (Poland). Since then, the company has not stopped growing and developing its activities. With a presence at Charleroi since that same year, Wizz Air flies to ten destinations, spread over six countries. Up to the present, the airline has transported more than 4 million passengers to and from Charleroi.

It was in May 2004 that the company’s activities took off, with the aim of establishing a low-cost airline operating from the outset from Central and Eastern Europe. Twelve years later, that challenge has been met and with flying colours. Wizz Air has not stopped growing and developing its activities by responding better to customer expectations, opening new lines or even creating services tailored to everyone.

When the company launched its activities in 2004, Wizz Air started two new routes departing from Brussels South Charleroi Airport, namely to Warsaw Chopin and Budapest. Success was on the cards from the very start. The company, nowadays one of the big names at BSCA, is endlessly developing its activities at Charleroi; and in 2015 alone, Wizz Air saw growth of 20%. In its 12 years of activity at Brussels South Charleroi Airport, the company has transported 4,269,409 passengers. The company currently operates ten destinations. With Wizz Air, six countries in Central and Eastern Europe can easily be reached at affordable prices.

To mark its 12th birthday, the company has, furthermore, announced several innovations. Accustomed to using Airbus A320s, with a capacity of 180 passengers, Wizz Air has recently introduced new A321s, able to carry 230 passengers, to its fleet. These latter in particular operate routes to Budapest from Charleroi on certain days of the week. Lastly, Wizz Air announced the launch of its new website, which is outstandingly user friendly.

Gabor Vasarhelyi, Communications Manager for Wizz Air, says: “Brussels South Charleroi Airport is one of the first and most popular airports in Wizz Air’s 12-year history. The first Wizz Air flight took off from this airport in July 2004 and since then, over 4 million passengers travelled on our low fare Charleroi routes, while enjoying our excellent onboard service. Wizz Air now offers 10 exciting routes to six countries and this number keeps growing as we bring more low fares to Belgium. All our Charleroi routes are served by a young fleet of A320 and state-of-the-art Airbus A321 aircrafts, each operated by our dedicated crew. We look forward to continuing our fruitful partnership with Brussels Charleroi Airport and welcoming even more passengers on board a Wizz Air flight.”

For its part, Brussels South Charleroi Airport, through its CEO Jean-Jacques Cloquet, likewise wishes the company a happy birthday: ‘Happy birthday Wizz Air! Twelve years in business and 12 years of presence at Charleroi. Wizz Air continues developing itself, and allows our passengers to visit the countries of Central and Eastern Europe at affordable prices. For business, for professional reasons or even for visiting family or friends, Wizz Air offers a range of attractive destinations to suit everyone. Active at Charleroi since 2004, the company has seen significant growth, and we hope to continue working on developing its activities on BSCA’s tarmac. ’