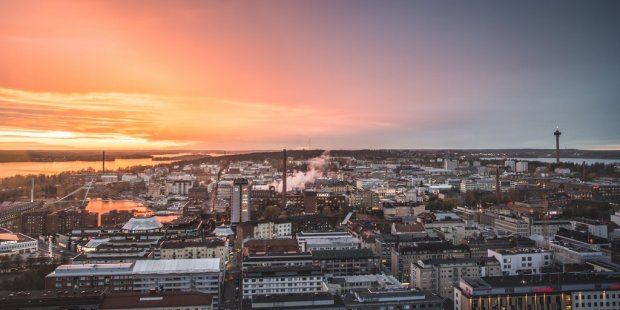 During the year 2019 in Tampere, Finland, various smart and sustainable city development measures were taken and new solutions were created to promote the well-being of the residents and the vitality of the area. The City of Tampere strengthened the digital competence of its personnel, promoted energy efficiency and emission reduction, and developed services, business cooperation and business ecosystem services in the area. Development work and new solutions were presented both nationally and internationally, e.g. at the Smart City Expo World Congress.

2019 has been a busy year for smart and sustainable urban development in Tampere. Among other things, the City of Tampere experimented an avatar robot in the education of children with long-term illness, tested video-based telephone interpretation for sudden interpretation needs, modernized digital public transport services, developed more flexible learning methods and launched an ERP system for educational and educational services. In addition, the features of the Osaamisbotti chatbot service for jobseekers, which has been in use for a few years, were further developed based on user needs. Citizens also had a concrete opportunity to participate in building a smarter city, for example in an experiment where families brainstormed and tested a transaction and search service for early childhood education.

"In addition to developing services, an important goal has been to strengthen the digital competence of our own personnel. This work will continue next year," says Mia Vaelma, Program Manager, City of Tampere.

Tampere aims to be carbon neutral by 2030. This means that services and city operations need to be developed in a more sustainable way. Climate emissions should be reduced by 80% from 1990 levels and offset by the rest.

"Tampere is heading in the right direction, as its total emissions have fallen by 29% from 1990 levels. Per capita emissions have been reduced by up to 48%," says Kari Kankaala, Director of Environment and Development, City of Tampere.

In 2019, we reached a milestone in the development of the Sustainable Tampere 2030 road map, which will be completed next spring. The road map defines measures to achieve carbon neutrality. To support the goal of carbon neutrality, a climate budget was developed as Finland’s first city. With this, the city makes its climate action and the financial resources allocated to it visible. Greenhouse gas emissions are also budgeted, i.e. subject to an annual ceiling. Tampere has also published a climate guide for its citizens at ilmastosankari.fi.

Energy-efficient solutions are being developed by the city in several projects together with companies. During the past year, for example, an operating model was designed to support oil-fired small houses in exchanging heating systems, wood construction was promoted, new innovative solutions for zero energy blocks were sought through the Vuores Isokuusi land assignment competition, and data collected from electric buses was visualized to support decision-making.

Smart city is developed together

In smart urban development, seamless collaboration between different actors is emphasized. In Tampere, one example of cooperation between a city and businesses in smart city development is agile experiments. In 2019, a total of four trial searches were conducted. Ideas were sought for, for example, energy-efficient real estate solutions, low-carbon mobility, guidance and utilization of data in operational control and optimization. The three searches resulted in a total of 55 solutions, of which 30 advanced to further discussions. In addition to these, 11 December closed fourth search, 14 further proposals were received. Both the city and the companies have experienced agile experiments as a workable way to collaborate effectively.

Smart urban development in Tampere Region is supported by world-class business ecosystems and pioneering companies operating in the area. In 2019, ecosystems and business renewal were promoted, among other things, by launching the industrial co-operation accelerator Rapid Tampere, by supporting the formation of national Smart Tram ecosystem and conducting in-depth studies regarding Tampere Region safety and security as well as artificial intelligence actors and their needs for ecosystem services. In addition, significant projects were launched in 2019, such as the € 3M event security project SURE, funded by the EU.

"The Tampere model and the close cooperation between different actors have attracted international attention. People want to know more about our way of doing things and learn from our experiences," says Seppo Haataja, Director of Smart Urban Development, Business Tampere.

Determined development work will continue next year. Tampere Smart City Week, to be held in January, will showcase solutions developed in Tampere through a variety of events for both citizens and international guests. We warmly welcome you to attend the week!

Tampere is building a sustainable and smart city, where living and moving are carbon neutral and where services are digital, seamless and user-driven. At the same time, the renewal of businesses in Tampere Region will be promoted and ecosystems will be strengthened in selected themes. New smart solutions are being developed in close cooperation with the city, companies, research institutes, citizens and other actors.