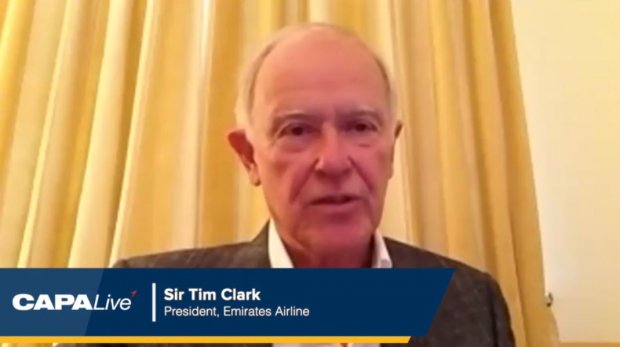 Emirates Airlines president Sir Tim Clark, speaking at CAPA Live October 2020, argued there will be a demand-driven bounce back sooner rather than later, and network airlines could come back stronger than in the past. Demand will return, so airlines need to maintain their physical product and use their marketing tools to keep brands in the minds of customers.

The lack of cohesive government response is not helpful. By having metrics that are almost unachievable means that governments are continuing to do their own thing.

There is huge demand for cargo, with opening of 70-80 routes being driven by the need for cargo space, which is helping to reduce cash depletion significantly.

Emirates Airlines president Sir Tim Clark, speaking at CAPA Live October 2020, which took place on 14-Oct-2020, stated that the role of the network airline "could be stronger than in the past" when travel demand returns; he knows how the markets responded to Emirates as it built its sixth freedom network model through its Dubai hub.

Sir Tim said that you "have to assume you will recapture the growth curve prior to the pandemic", and he believes there will be a demand-driven bounce-back that will return "sooner rather than later" – although whether airlines are in "good enough shape to respond to that" is another question.