Ryanair's Eddie Wilson: " You've got to give people confidence" 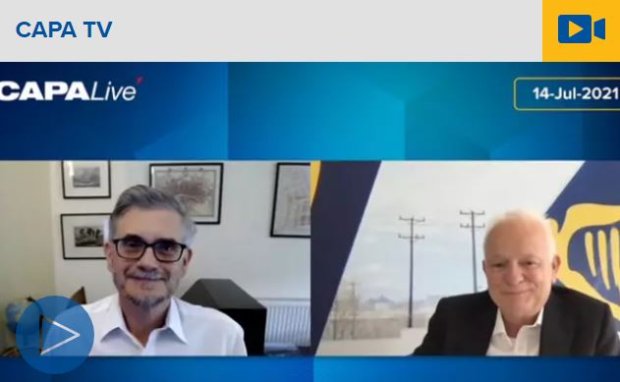 Some of the key highlights can be found below:

JW: Hello and welcome to another CAPA Live, and I'm delighted to give a very warm welcome to Eddie Wilson, chief executive of Ryanair DAC, the main operating company of the Ryanair group, which is responsible, I think Eddie, if I'm right, for 250-odd aircraft, which I think is 60% of the group total, or thereabouts. So it's a very significant airline in its own right. I think in fact, it's the biggest airline fleet in Western Europe.

So Eddie, I'm just going to kick off, I think, by asking you about the current situation where the group is in terms of capacity and traffic.

I think the June traffic figures for the group suggested that you're at around about 50% of 2019 seat capacity, so pre-COVID levels. But passenger numbers are still a bit below that, at 37%. So what are the plans for the group going through the summer and to the end of the year in terms of capacity?

EW: We originally had said we're going to be north of 60% of capacity and reasonably confident for the summer months, that we will get up to around 75% to 80% of capacity for this summer. The digital COVID certificate has given people the confidence to book

“Yes. I think it's been a relatively strong build, driven by much lower fares coming back from around a million passengers in April to the five million as we made our way up into June. I think we're seeing that we originally had said we're going to be north of 60% of capacity and reasonably confident for the summer months, that we will get up to around 75[%] to 80% of capacity for this summer.

“So you have some countries that were late to the party. I think the EU passport, the digital COVID certificate, has given people the confidence to book, and with the UK and Ireland lagging, but I think the UK have with the announcement recently by the prime minister that they're getting back to normal, we expect that will make its way into travel and we will see the return to travel without restrictions for member countries.

"So I think it's gradually making its way back and I think that August will really show the level of the snapback, but too early to say on that. But I would say somewhere in the region of 75%."