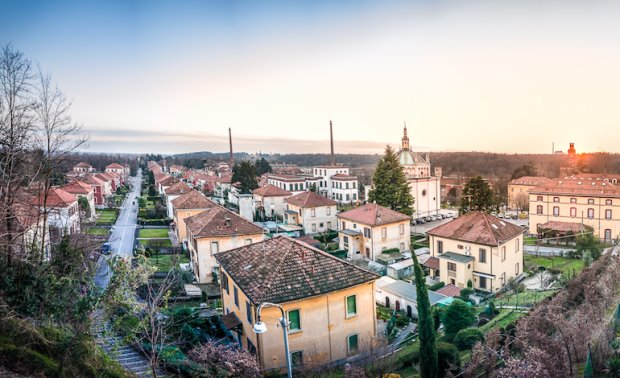 Discover the only example of industrial archeology in Lombardy region.

In December 1995, the industrial site became a World Heritage Site by UNESCO as an exceptional example of a workers' village both for its perfect conservation state and for its unique urban planning.

The village was build based on an idea of The Crespi family which began their business in 1878 knowing that there was a lot of manpower available in the area and seeing the possibility of creating an industrial canal along the Adda river to profit by its hydraulic energy.

Not only an industrial site but also a village for workers and their families. The main idea was to give everyone a house with garden and to provide all the essential services, from public toilets to school, from church to sports field, from after-work to small hospital.

The urban plan was simple: the factory is located along the river and next to it there was the owners' villa-castle. The workers' houses are located on several parallel streets, to the south is a group of later villas, for employees and managers. At the beginning of the village there is the church and next to it the school.

A day in Crespi d’Adda is not just a cultural visit, but it is above all a dip into the last century and an opportunity to identify with the life and habits of the past.

“has written Volotea goes to three on the BGY-OLB”