On October 31st easyJet operated its first ever scheduled flight from London Gatwick to Milan Bergamo. 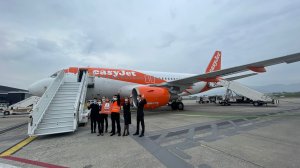 The airport of the British capital is now linked with all three Milan airports.

London is the third year-round destination served by easyJet at Milan Bergamo Airport in addition to Paris Charles de Gaulle and Amsterdam which will be also increased to 6xw (daily except Sat) starting next December.