Milan Bergamo Airport welcomed yesterday the first flight arriving from Rotterdam, operated by Transavia. The B737-700 of the low cost airline part of the Air France-KLM Group landed at 16:00 local time and was greeted by the traditional water arch from the Orio al Serio Fire Brigade Detachment. 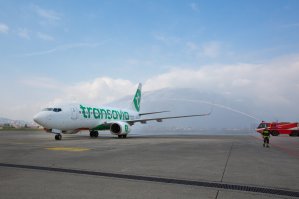 Giacomo Cattaneo, Aviation Director of SACBO, and Thijmen Van Schaik, Area Manager of Transavia were present at the arrival of the inaugural flight of the new route. The flight between Rotterdam and Milan Bergamo, operated with a 149-seat B737-700 aircraft in single class, is scheduled every Tuesdays, Thursdays and Sundays. An extra frequency on Friday will be added from 1st July to 26th August.
Transavia returns to fly to Milan Bergamo airport, where it had guaranteed connections during the 2000s until the beginning of 2009. Rotterdam is an absolute new destination that joins the network of scheduled flights of Milan Bergamo.