Brno–Turany Airport is an airport in Brno, Czech Republic. Around 7.5 km away from Brno city centre, the airport lies on the edge of the historical Austerlitz battlefield.

Brno-Turany Airport's terminal consists of two concourses and its new departure hall (opened in 2006) is capable of handling 1,000 passengers per hour.

Designed by architect Petr Parolek, the building is considered to be one of the most significant projects of Czech contemporary architecture and a striking example of the growing trend of "organic architecture". 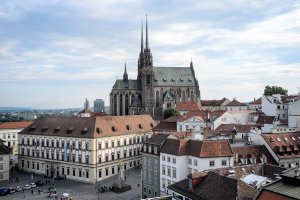 The Czech Republic's second-largest city is set to be served nonstop from the Ukrainian capital.