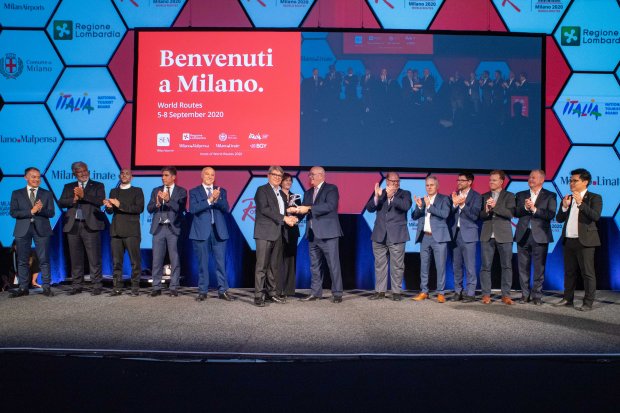 The momentum is certainly with Milan at the moment. Not only will the city be the host for World Routes 2020 in September (pictured above), but Malpensa Airport will witness the resumption of Gulf Air services in July, as well as new long-haul services from EVA Air and All Nippon Airways next year.

All Nippon Airways (ANA) will begin flying to Milan Malpensa from Tokyo Haneda, the world’s fourth busiest airport, in Summer 2020, becoming the Italian airport’s 15th serving Asian carrier. The service will mark the return of a Japanese carrier to Italy after a 10-year gap. Malpensa will be only the eighth European airport that the Star Alliance carrier serves from its Tokyo Haneda and Narita bases, as Milan joins an esteemed roll call of the region’s airports – London Heathrow, Frankfurt, Paris CDG, Brussels, Munich, Vienna and Dusseldorf – with direct services from the Japanese carrier.

The beginning of ANA flights next year will signal the arrival of yet another ‘Five-Star Airline’ in Milan, as the airline is one of just eight carriers in the world with the top accolade from the international quality ratings organisation SkyTrax. Malpensa will now welcome six of these eight prestige carriers in 2020. “ANA’s flights will be particularly welcomed by the Milanese business community thanks to the high-end quality of its service,” adds Andrea Tucci, VP Aviation Business Development at SEA.

Tokyo is the number one destination in Asia for passenger demand from Malpensa. “The Japanese market is also Milan’s second biggest in Asia, worth around 400,000 O&D passengers per year, and it has increased 11% in the year-to-date,” confirms Tucci. “Japan is becoming more popular in Italy and it is developing into a real brand with a big response from Milan: its outgoing traffic share is the biggest in Italy.”

The opening of this new route comes as a direct consequence of further bilateral agreement negotiations between Italy and Japan “Milan was the gateway selected by a Japanese airline as the entry point into the Italian market. This is yet further evidence of the importance of getting traffic rights allocated to the city of Milan,” explains Tucci.

“In these negotiations, the 2020 Tokyo Olympic Games have also played an important role and it is no coincidence that Milan itself has been awarded with 2026 Winter Olympics, meaning that the connection between the two cities begins under the very best auspices.”

The long-haul carriers keep coming in Milan, as July next year marks the return of Gulf Air to Malpensa, which last served the airport in March 2012 from its hub in Bahrain. The Middle Eastern carrier is the seventh airline from the Gulf region to serve Milan. “Bahrain will fill the only market gap missing at Malpensa without a direct connection to the Gulf area. This new service brings us to the same level as Paris CDG, Frankfurt and London Heathrow in terms of Gulf customer portfolio,” effuses Tucci.

The recent announcements by Gulf Air and ANA follows shortly behind that of EVA Air. The Taiwanese airline will inaugurate a four times weekly flight from Taipei Taoyuan from 18 February next year. “2020 looks like a very promising year already with three new long-haul route launches, especially as it comes after a successful, though challenging 2019,” confides Tucci.

Last summer, between 27 July to 27 October, Milan Linate was closed for runway maintenance and its traffic was temporarily shifted to Malpensa, resulting in a significant spike in the latter airport’s throughput in a period of the year which is already its busiest time. “Malpensa successfully passed the test, having fully and smoothly accommodated +28% incremental capacity. The investments made for the project are here to stay and are ready to serve those airlines willing to invest in one of the few big international airports in Europe with no capacity crunch,” enthuses Tucci.

The return to normal operations has not seen any decline in throughput, on the contrary, traffic is growing in November at 7%, a rate still above the Italian average. In the year-to-date (end October) SEA’s traffic was up by 9% to 22.8 million passengers, when not considering Linate flights, and has risen to 27.7 million (+18%) when the downtown airport’s flights are taken into consideration.

The Milanese momentum is not just restricted to the airport, as the city itself is experiencing more visitors than ever, concludes Tucci. “September 2019 marked a record number of tourists in the Milan urban area, being the first time ever that total visitors hit one million, representing +17% growth over the same month in 2018. This is an important milestone that confirms the attractiveness of Milan as one of the preferred destinations in the world.”

“has written Lombardy Plan: 3.5 billions for infrastructures and other interventions”