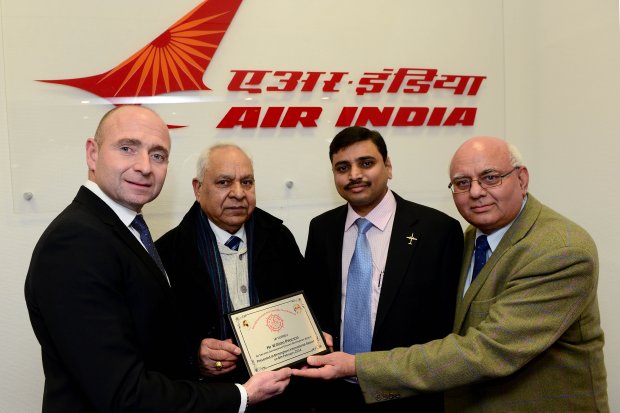 Air India and Birmingham Airport are celebrating after carrying 50,000 passengers on board over 200 Dreamliner flights between Birmingham and India, since launching in August last year.

To celebrate its success in the first six months, leaders of the local Sikh community presented Birmingham Airport with a commemorative plaque to thank the team for launching the flights last year and reconnecting Birmingham with Delhi and Amritsar; an important spiritual centre for the Sikh faith.

Speaking at a ceremony held at Birmingham Airport last week, the Airport’s Aviation Development Director, William Pearson, who received the plaque on behalf of the airport, said: “The Midlands has the second largest Asian community in the UK, so it’s no surprise that the airline has carried its first 50,000 passengers and experienced over 80% load factors on the route since launching last August.

“The four times a week service to Delhi and Amritsar, using the brand new B787-800 Dreamliner aircraft, with two configurations of business and economy class isn’t just ideal for those visiting friends and relatives, but also offers corporate travellers connections across India, Asia, Europe and North America from Delhi. Air India will soon be part of Star Alliance which gives passengers a choice of world-wide connections.”

Shri 108 Sant Sarwan Dass Charity trustee Nirmal Dass presented the plaque to the Airport. He said: “This service is incredibly important to the entire Asian community across the region. We’d like to say a big thank you to Air India and Birmingham Airport for providing these direct links to Delhi and Amritsar from our local airport.”

Vishwanath Panyam, Air India station manager at Birmingham Airport, added: “Reaching this impressive milestone in just six months clearly demonstrates the strong demand that exists for this service. It has proven to be tremendously popular amongst the region’s Asian community, for business and leisure passengers alike.”

The service operates each Monday, Tuesday, Thursday and Saturday, arriving from Amritsar and Delhi into Birmingham at 1800 hours and departing to Delhi and Amritsar from Birmingham at 2130 hours.

The 256 seat B787-8 series aircraft has a split cabin, consisting of 18 business class and 238 economy seats. Birmingham is only the second UK airport to operate dedicated Boeing 787 scheduled services.