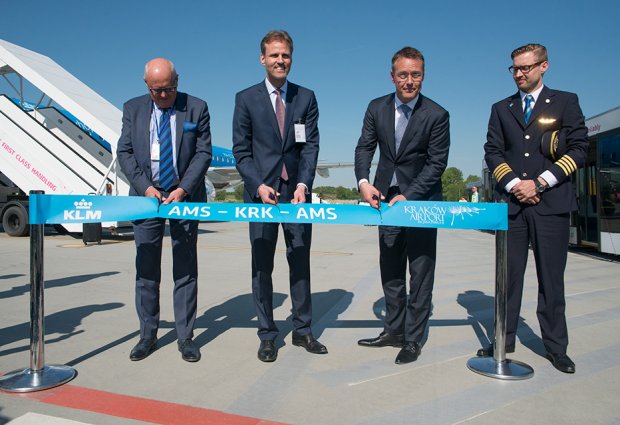 Today (18 MAY 2015), Kraków Airport and KLM Royal Dutch Airlines have launched the next new destination: Kraków-Amsterdam.

Today (18 MAY 2015), Kraków Airport and KLM Royal Dutch Airlines have launched the next new destination: Kraków-Amsterdam. The route between Kraków and Amsterdam Schiphol airport will be offered year-round, seven times a week on the Embraer 190 aircraft.

This key route is characterized by its considerable potential for tourism and business. Thanks to the daily KLM’s offer residents of Małopolska gain access to the network of more than 130 routes offered from base airport in Amsterdam and access to an important hub of Sky Team alliance. Passengers will be able to use not only from a European network of Dutch carrier, but also the connections among Asia, South America or Africa.

Flights between Kraków and Amsterdam are scheduled according the timetable below:

After landing, the first aircraft with a characterized for KLM blue livery was welcomed with a water salute.

After the ribbon-cutting ceremony carried out by representatives of the airport, the carrier and the Dutch Embassy in Poland, as well as photo session passengers of the first flight from Amsterdam received materials on the sights of Kraków, provided by the Kraków City Hall.

Traditionally to celebrate the inaugural flight Kraków Airport had a surprise for passengers.
All departing passengers passed through a gate of balloons in the colours of the Netherlands prepared specially for this occasion, were treated to a pie and received small gift from the carrier.