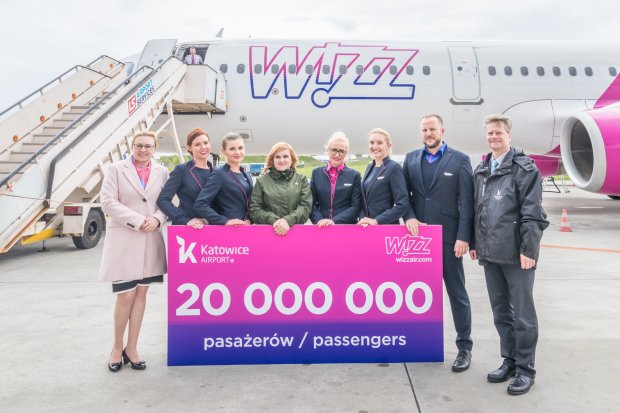 Katowice is the first city where Wizz Air started its operations in 2004 in Poland.

Today Wizz Air, the biggest low-cost airline in Eastern Europe, celebrates a very special milestone – 20 million passengers carried on low-cost routes in its network of connections to and from Katowice. There was a surprise waiting for the 20-millionth passenger travelling today from Oslo Torp in Norway to Katowice. The 20 millionth customer received WIZZ voucher and a gift from Katowice Airport.

Katowice is the first city where Wizz Air started its operations in 2004 in Poland. Since its first flight from Katowice to London Luton on 19 May 2004 Wizz Air has been constantly expanding its offer of travel options at attractive prices for a growing number of passengers. In 2018 Wizz Air carried over 2.1 million passengers on its low-cost routes from and to Katowice. At present Wizz Air operates 42 routes to 19 countries from Katowice Airport.

Recently WIZZ has opened or announced the opening of new routes from Katowice to such fantastic places as Fuerteventura (the Canary Islands), Catellón (Spain), Santander (Spain) and Ålesund (Norway). The growing network of WIZZ connections from Katowice includes such destinations as Alghero, Burgas, Larnaca, Lisbon, Malaga, Podgorica, Porto, Split and Tenerife.

With 11 millions of seats put on sale in 2019 Wizz Air currently offers 168 routes from nine Polish airports to 28 countries.

Andras Rado, Corporate Communication Manager at Wizz Air has said:” We are very happy to celebrate another excellent result we have achieved with Katowice Airport. Katowice was the first city where Wizz Air started its operations in 2004. During the last 15 years more than 20 million passengers took advantage of WIZZ offer and travelled on routes to and from Katowice. This year we have added new destinations to our network of connections from Katowice. With 8 modern Airbus aircraft based in Katowice we remain dedicated to provide service to our Polish customers. We always take care of the highest level of our services and low fares. Regardless of the purpose of travel, business or tourism, we invite our passengers to get onboard our aircraft and take advantage of our offer of 42 attractive destinations available from Katowice.”