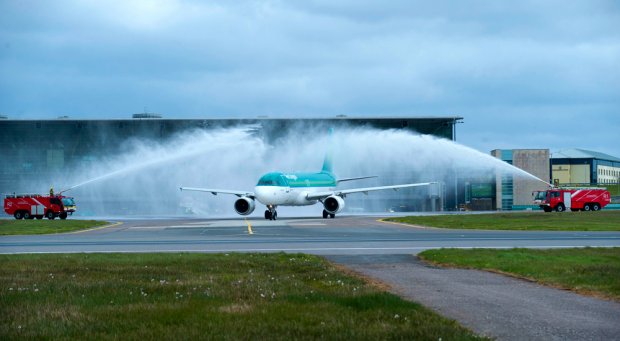 The route was officially launched by the German Ambassador to Ireland His Excellency Matthias Höpfner who was also one of the first passengers to fly on the inaugural flight. He was joined by a delegation of Cork representatives which included Lord Mayor of Cork, Chris O’Leary and County Mayor of Cork, John-Paul O’Shea.

Aer Lingus will operate the twice weekly service on Wednesday and Sunday giving both business and leisure passengers alike access to the largest metropolitan area in Germany.

Celebrating the launch of the new route Cork Airport Managing Director Niall MacCarthy said: “We’re extremely pleased to launch this significant new route for the region which will add to our popular year-round Munich service. A huge amount of work has gone into securing this route both here and in Germany and all involved are very excited that it is now taking off. We are delighted to have the German Ambassador to Ireland His Excellency Matthias Höpfner here to help us mark the special occasion.

“We’ve worked with colleagues here and in Germany to build the business case for this route as we see the significant potential in the German market. I’m delighted to say the hard work of Cork Airport, the regional and tourism stakeholders has paid off with Aer Lingus introducing this valuable route.

“With this coalition, we convinced a number of German tour operators to include Cork in their programme of destinations for 2016 and this helped underline the commitment that there is to this new service in terms of inbound tourism.”

The collaborative model used to win the new Düsseldorf service for Cork has potential to deliver additional new services for the airport and the region Mr MacCarthy said.

“The success of securing the new Düsseldorf route is proof that when all of us involved in the travel and tourism sector come together and work as a team, we can do great things for the region. I have no doubt that now we have created a model that works for all stakeholders. We will see further additional new routes for Cork Airport in the future.”

Aer Lingus Chief Executive Stephen Kavanagh said: “We’re delighted to launch this new route today and to add to our routes servicing Cork Airport. We are proud to be Cork’s largest airline with over 1.25 million passengers flying annually to and from the 22 destinations on our network. We will be working with both Cork and Düsseldorf airports and the respective tourism industries to ensure this route is a success.”

Niall Gibbons, CEO of Tourism Ireland, said: “We warmly welcome the new Aer Lingus flight between Düsseldorf and Cork and we look forward to working with Aer Lingus and Cork Airport to maximise the promotion of the service. As an island destination, the importance of convenient, direct, non-stop flights cannot be overstated – they are absolutely critical to achieving growth in inbound tourism. Germany is the third-largest market for tourism to Ireland and is estimated to be worth close to €400 million annually to our economy. Last year was a record year for Irish tourism from Germany – when we welcomed almost 630,000 German visitors, an increase of 13% on 2014. Tourism Ireland is rolling out an extensive programme of promotional activity again in 2016 – to keep the momentum going and build on that growth.”

Mr Höpfner said: “Opening up further links between Germany and Ireland is a hugely positive step and we are delighted that the people of Düsseldorf and beyond will now have more transport options when planning a trip to Ireland. We will also be very excited to welcome visitors to Düsseldorf from Ireland be it for business or pleasure. Düsseldorf certainly has something to offer everyone and we’ll make sure you have a thoroughly enjoyable stay in the region.”

Düsseldorf Airport is Germany’s third largest, handling 21.8 million passengers last year. It has excellent connectivity to the rest of Germany with more than 400 trains per day stopping at one of its two onsite train stations, offering convenient direct mainline trains to many other German cities or a suburban rail option into the city centre.