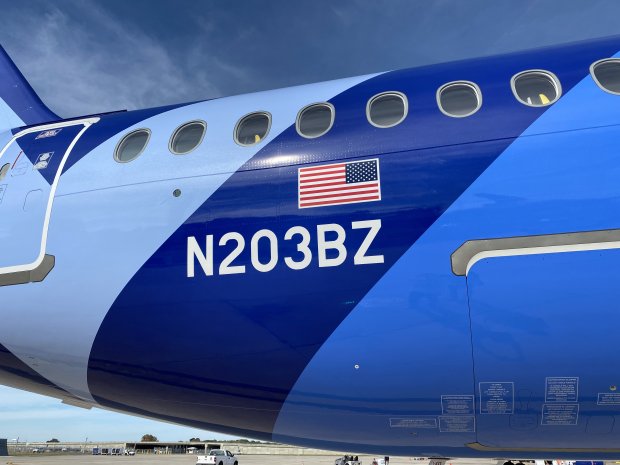 The new airline has 80 A220s on order and plans to start flying the first of them at TPA this spring.

Tampa International Airport operations specialist Jordan Gottlieb spends plenty of time around the runways of TPA. He’s seen every type of plane from each airline that takes off and lands here.

But on Friday, Dec. 17, there was an extra excitement in the air.

Jordan had his DSLR camera ready to go for a special landing scheduled for mid-afternoon.

It was Breeze Airways' brand new aircraft -- N203BZ -- an A220 on just its fourth flight ever, coming in from the Airbus assembly plant in Mobile, Alabama.

“We’ve been tracking it since it took off,” said Gottlieb as he glanced down at a computer screen monitoring the plane’s position. “It’s just over Floral City. It’s about 10 minutes out.”

At just after 1:30 p.m. the royal blue beauty was spotted soaring in on final approach. Jordan jumped out of his truck along runway 19R and got his camera ready to snap photos of the jet’s historic first touchdown at TPA.

“It’s like a kid in a candy shop seeing this today,” Jordan said with a wide smile covering his face. Moments later his camera began snapping photos rapid-fire as the new aircraft gently touched down for what appeared to be a perfect landing.

Over at Airside C, members of the Breeze Airways team gathered at gate C45 to watch as their brand new plane -- and the future of their young airline -- came taxiing into view.

“This is about as new as we get them,” said Jeroen Neijenhuis, a Start-Up Technician for Airbus on hand for the plane’s delivery. “No passengers have been on there yet.”

N203BZ and four other new deliveries will remain at TPA while Breeze trains crew members and works with the FAA to get the new aircraft type approved for commercial service.

But before that happens, flight attendants, maintenance technicians, and ticket agents all waited to be among the very first to ever board the aircraft.

The plane is so new, everyone boarding was asked to put on shoe coverings to keep the plane in mint condition.

Breeze COO Tom Anderson was also on hand to welcome team members aboard.

“It’s the culmination of a couple years of hard work by the entire team to take delivery of this first aircraft,” said Anderson. “It’s an absolutely instrumental part of our future. We have 80 of these aircraft on order. It’s the aircraft that allows us to expand the Breeze footprint to much longer-range markets across the entire country.”

Among those most impressed was Tampa International Airport’s CEO Joe Lopano, who came down with other members of the executive team for a first look at the new plane.

“It’s a beautiful airplane and its going to grow our airport in a big way,” said Lopano.

The Breeze A220 utilizes the latest technology to give passengers a quiet, more fuel-efficient ride. The plane’s cabin also has noticeable differences inside with oversized windows measuring 16 inches tall by 11 inches wide. There's also a surprisingly large nine-row business class section that spans nearly half the plane with 36 reclining chairs complete with foot rests.

The aircraft also comes with some of the latest tech including universal power outlets and charging ports for both USB-A and USB-C cords.

Anderson said the planes likely won’t enter service until May as the airline works to wrap up proving runs and training by the end of April.

“has written First Breeze Airways A220 Arrives in Tampa”