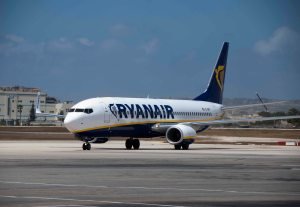 RyanAir launched its base at Malta International Airport. The low cost carrier will be basing an aircraft and thirty crew members in Malta to operate the six new routes to Billund, Bologna,Krakow,Marseille,Seville and Valencia. These routes are an addition to the thirteen which RyanAir already operates to Malta, bringing a total of 19 routes. With these additions RyanAir anticipates an increased traffic of 800,000 passengers.

The aircraft arrived at 11.29am having left from the RyanAir maintenance base in Shannon via Valencia, where from the passengers then landed at MIA and were greeted with folklore music and local delicacies. A large decorative cake was prepared to mark the occasion and was traditionally cut by Luis Fernandez, RyanAir Sales and Marketing Manager.

Alan Borg, representing Malta International Airport said that the newly introduced routes all address potential markets and meant an increase of 15 flights per week. He then referred to Air Malta as being its top client with 56 per cent of the market share. All in all, Air Malta's efforts and results coupled with marketing from the Malta Tourism Authority and cooperation with all other stakeholders were imperative for MIA.

Joseph Galea, representing the Malta Tourism Authority, said that improved access was very important for Malta. However, he stressed the importance of having sustainable routes that operate in the long term rather than having seasonal operation.