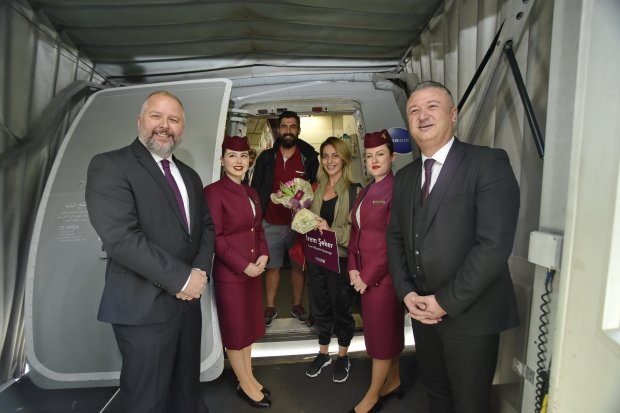 İrem Şeker, on board from Doha to Sabiha Gökçen together with her husband, was the lucky 1 millionth passenger. Caught by surprise, she was greeted with cheers from SAW and Qatar Airways officials. She received two complimentary tickets of Qatar Airways from SAW to Doha, which handed over by Mr. Ferit Aksun, Country Manager Eastern Europe South.

Other passengers on board together with the flight crew were also welcomed with traditional Turkish delights and refreshments. This followed by a cake cutting ceremony and gift exchange between SAW and Qatar Airways.

His comments were echoed by Ferit Aksun, Country Manager Eastern Europe South “Qatar Airways is delighted to able to celebrate our fifth anniversary of operating from Sabiha Gökçen, as well as welcoming our one millionth passenger on the route. We have further strengthened our commitment to the important Turkish market this year by opening a route to Izmir and we hope to continue our growing relationship in the years to come.”