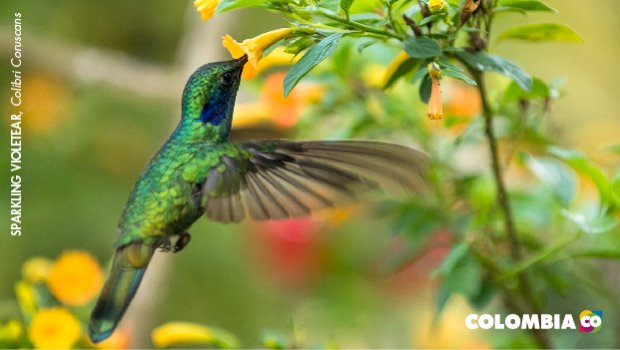 Once again, and for the fourth time in a row, Colombia took first place in the Global Big Day, an international bird counting competition held on May 9. With a total of 1,440 species observed, surpassing countries such as Peru, Ecuador, and Brazil, hundreds of birders from all over the country spied the highest number of species in the world from the comfort of their homes.

The international championship, organized by the Cornell Lab of Ornithology at Cornell University, invites experts and amateurs all over the world to register birds on its eBird platform. This year, the contest was held virtually, inviting “birding” from home, and achieving record participation with over 48,000 people.

"Colombia’s potential in nature tourism is once again confirmed. Winning this competition for the fourth consecutive year means that Colombia's biodiversity is invaluable and that we must protect it with responsible tourism and activities such as the Global Big Day that generate conservation awareness. This is a fresh reason to keep in touch with foreign travelers and be ready to receive them once international tourism is reactivated," remarked Flavia Santoro, president of ProColombia.

The departments that registered the most birds were Antioquia, with 600 species, Valle del Cauca, with 548 species, Meta, with 532, and Caldas and Cundinamarca with 505 each.

Peru followed Colombia on the ranking with 1,127 birds recorded; followed by Ecuador with 1,021 and Brazil with 942. For the organizers, logging these animal sightings provides important information to help preserve them. All photographs of the birds are uploaded to the eBird platform, which is publicly accessible for the purpose of conducting research for their conservation.

ProColombia promotes the country as a destination for birdwatching with a campaign called ‘Colombia #1 in bird species on earth’, which advertises the national territory as a nature trove. The campaign had a worldwide impact of 8.3 million impressions in digital media, with over 780 thousand views on YouTube and five thousand plays on streaming platforms. All the related information can be found at www.colombia.travel/birds/.

ProColombia also supported the production of the documentary The Birders, directed by Gregg Robert Bleakney, which presents the experience of bird watching on the northern route of the Colombian Caribbean. It is broadcast on YouTube and to date has over 282,000 views (https://www.youtube.com/watch?v=T-jn1_thxK8).

“has written Settled investors ratify Colombia as an investment destination”

Key Contacts at Colombia by ProColombia