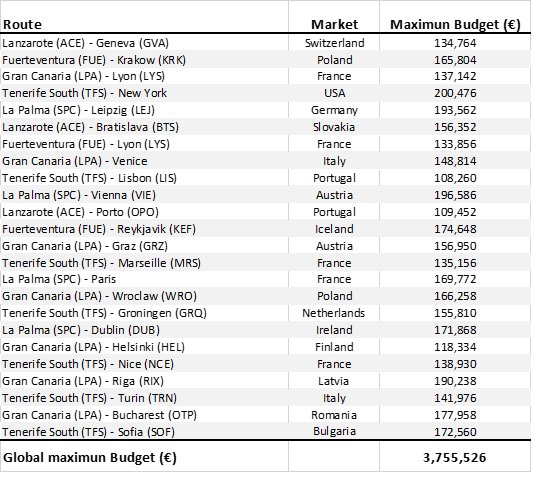 Maximum budget for each route is listed above.

The Canary Islands have launched a route incentive package calling for 24 new routes, via the Flight Development Fund (FDF), with the intention of improving the air connectivity of the islands and boosting the diversity of its tourism markets and clients.

The total maximum budget for the call is of 3.7 million euros.

Since its inception, the Fund has incentivized the launch of 18 new routes of high interest to the Canary Islands.

The Flight Development Fund is just part of the effort that Canary Islands Tourist Board (Promotur) makes to improve air connectivity to the Canaries. It also includes attending international aviation events and constant dialogue with airlines aimed at keeping them informed about the destination.

Promotur puts its Brand Centre at the disposal of airlines, with a huge range of promotional material and resources available for use, and carries out inspiring marketing actions aimed at boosting interest amongst the audience in regions with direct flights to the Canary Islands.