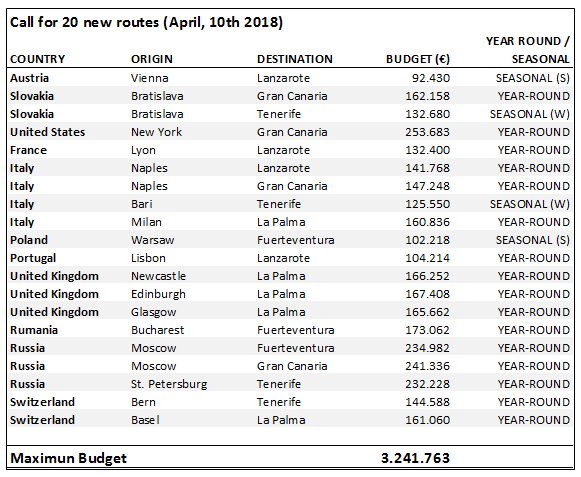 The funds available for each of the routes is listed above

The Canary Islands have launched a route incentive package calling for bids for 20 new routes, via the Flight Development Fund (FDF), with the intention of continuing to improve the air connectivity of the islands and boosting the diversity of its tourism markets and clients.

The total maximum budget for the call is of 3.2 million euros.

The proposed routes were selected after an analysis of strategic interest, potential viability, and a lack of existing connectivity.

The changes allowed the Canary Islands to offer incentives for the creation of new aviation routes and granted an important concession removing the limit on the maximum number of passengers using Canarian airports.

In addition, it should be remembered that there are still other routes that have not yet been covered by the previous calls (April 2017). These calls will remain open indefinitely, which is an opportunity for airlines to have them present in their decision committees. It should be noted that not all of them have the same planning periods and that some of them need up to 2 years in advance, so that very short deadlines are not efficient in this context.

As a result of all this work, Turismo de Canarias has been awarded last year with the two most important international awards in the field of air connectivity: the best European destination (Routes Europe, April 2017, Belfast) and the best destination in the world attracting air routes (World Routes, September 2017, Barcelona). This year 2018, Canarias is once again nominated as the best European destination for the next edition of Routes Europe to be held in the city of Bilbao between April 20-22.