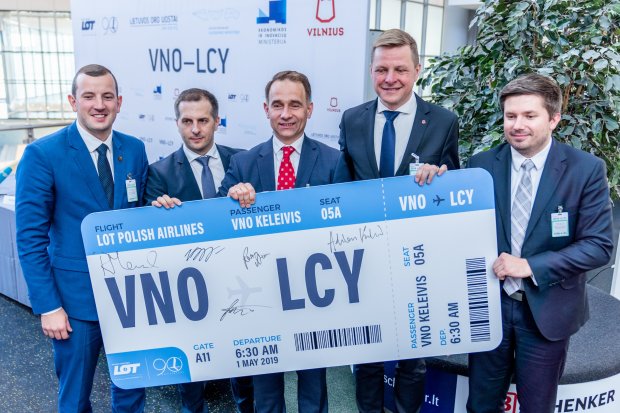 The long-awaited new destination to London’s financial centre is launched at the capital’s air gates. The first aircraft of the airline LOT Polish Airlines will take off from Vilnius to London City on 1 May, at 6:30 a.m. The new destination is significant for economic and social development of Lithuania seeking to attract more foreign investments, improve the country’s image and accessibility. Intensive negotiations regarding new destination were conducted by several parties concerned.

According to the Minister of Transport and Communications, the new destination is of strategic importance for the development of the state. This fact was acknowledged by representatives of the European Commission.

“We have worked intensively in order to improve consistently the accessibility of Lithuania by the air transport. We have had discussions regarding this flight for many years involving previous governments; however there has always been a lack of political will. Real works were made only now. A direct flight that is particularly convenient for business opens new opportunities for Lithuania, improves the country’s image. We expect that this flight will be convenient also for an increasing traffic of tourists”, told the Minister of Transport and Communication R. Masiulis.

On our own turn, Director of Vilnius Airport Dainius Čiuplys notes that the company started preparing for a tendering procedure aimed at finding an air carrier to fly from Vilnius to one of the world’s financial centres already in 2017. A number of European airlines have been interested in this opportunity, and the contract was awarded to the Polish LOT. According to the CEO of the Vilnius Airport, the emergence of a new, strategically important direct link is a significant step for the country in all respects.

“This is the first case in the EU, when the flight mechanism intended to attract the business passenger segment will be supported by the state. Other European Union countries could gain the good practice from us, as together with the partners – Ministry of Economy and Innovations, Ministry of Transport and Communications and the public establishment Investuok Lietuvoje, we were the first to implement such a project”, told Mr. Čiuplys. CEO of the Vilnius Airport added that passengers were offered the most convenient schedule of flights both ways to London.

Connection with the United Kingdom is currently a priority issue for Lithuania, as last year this country’s airlines became the most active investors and, according to the number of planned direct foreign investment projects, for the first time it has exceeded the investment from other states. However, the Minister of Economy and Innovations Virginijus Sinkevičius claims that after creating appropriate travel conditions, even better results may be achieved.

“We calculate that during the last three years we lost more than 4,300 new jobs planned to be created by the United Kingdom companies merely because there was no direct business segment flight between Vilnius and London. Upon the emergence thereof, the investment environment becomes more attractive for investors from the United Kingdom and this will enable to compete for new jobs in Lithuania even more intensively”, told Mr. Sinkevičius.

Vilnius municipality is also prepared to promote the development of the new destination by allocating an amount of EUR 2.1 million. Funds collected from the tourist fee are channelled for boosting the marketing of the Vilnius-London direction. The capital’s mayor Remigijus Šimašius is convinced that the country’s residents will directly feel the benefit of the new destination.

“I do not have any doubt that this business-level flight will help the emergence in Vilnius of many more international companies and good work places for specialists. Whereas our efficient city team will ensure that they never lack anything”, told the Mayor of Vilnius city Šimašius.

Each year, about 1 million passengers travel between Lithuania and the United Kingdom, whereas airports of the latter country are ranked among the top five in our country. Therefore, Mr. Rafal Milczarski, CEO of LOT Polish Airlines, has no doubt in the potential of new flights from Vilnius. According to him, until now Lithuania did not have an alternative for the airports located further from London, such as Luton or Stansted.

“By offering these flights we may respond to the established need of the business segment and other travellers. The new LOT link will significantly shorten the trip from Vilnius to London, whereas from the business perspective, this forms a significant basis for the growth of investment between our countries. Thus, we believe that flights will not only receive a huge interest of travellers, but will also help strengthen relationships between the countries”, states Mr. Milczarski.

Following the needs of business passengers, during the summertime an aircraft will take off from Vilnius every working day, at 6:30 a.m. and 4:55 p.m., on Saturdays at 6:30 a.m., Sundays – at 4:55 p.m. Flights from London’s City Airport on working days will take place at 9:35 a.m. and 6:40 p.m., on Saturdays flights will be operated in the morning, on Sundays – in the evenings. The duration of the trip between the two capitals is 3 hours.

Flights Vilnius – London’s City Airport will be operated by one of the newest aircraft Embraer ERJ-190 of the carrier LOT Polish Airlines.

The Lithuanian network of airports includes three airports in Vilnius, Kaunas and Palanga. During 2018, they served 6.3 million passengers and 61 thousand flights. During the winter season, 14 airline companies organize flights in 86 directions to 67 cities in 27 countries. Based on data of the Airports Council International (ACI Europe), Lithuanian airports contribute to the Lithuania’s GDP by 2.5 percent.