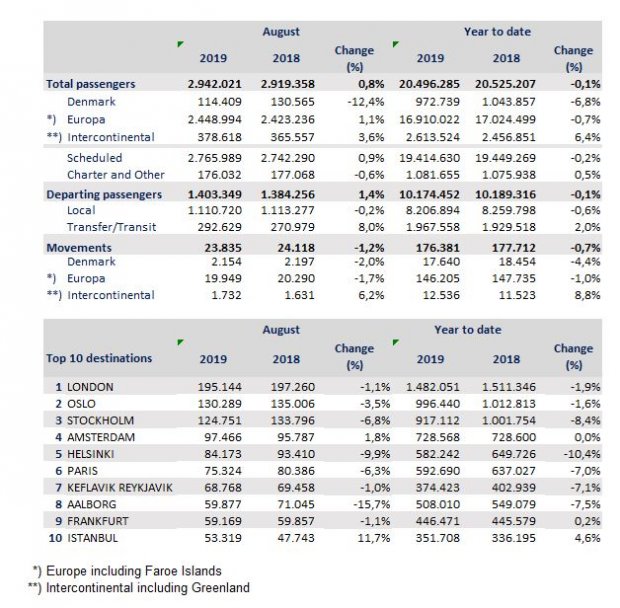 Overall, more than 2.9 million passengers passed through Copenhagen Airport in August – representing an 0.8% increase compared with the same month last year. That made it the busiest August on record for Copenhagen Airport, driven mainly by transfer passenger numbers. It was also a strong end to three busy summer months, which saw an increase in traffic to and from Germany and Turkey, in particular.

The summer holidays are over for most of us. This marks the end of three busy summer months for Copenhagen Airport, nicely rounded off by yet another increase in passenger numbers in August. A total of 2,942,021 passengers travelled through Copenhagen Airport in August, which was 22,663 more than in August 2018 – a growth rate of 0.8%.

”As usual, August was a very busy month for us, and we were pleased to see an increase in passenger numbers, mainly driven by transfer passengers. That reinforces our position as an attractive Scandinavian hub”, said Thomas Woldbye, CEO of Copenhagen Airports A/S.

Overall, the number of transfer passengers in August was up 7.6% on the same month last year, while the number of passengers starting or ending their journey at Copenhagen Airport decreased marginally by 0.8%.

With August's traffic data, the time has come to review our performance for the three summer months of June, July and August. Just over 9.0 million passengers travelled through the airport, nearly matching the record summer of 2018.

In terms of total passenger numbers, however, Britain and London in particular remains the destination attracting the largest number of passengers.

”Also in the summertime, our passengers generally gravitate towards traditionally strong destinations such as Britain, Norway and Germany. By contrast, the number of people travelling to and from Spain declined somewhat, but this was mainly due to Primera Air’s bankruptcy last autumn reducing the frequency of service to Spain,” explained Thomas Woldbye, adding:

”I am particularly pleased with our very successful traffic flow over the summer period with few delays and cancellations, which is a reflection of the close collaboration between the airport, airlines, handlers and the many partners at CPH.”

Just under 20.5 million passengers travelled to and from Copenhagen Airport year-to-date. That was 0.1% fewer than in the same period last year. The decline should be seen in the light of the bankruptcies of Primera Air and Wow air, certain airlines making adjustments and the pilot strike in the spring. Last year's warm summer weather in Denmark may also have had an impact on travel patterns this summer. Domestic traffic was 6.8% lower year-to-date, primarily as a result of a declining average load factor.

Copenhagen Airport continuously strives to make the airport an attractive place for airlines to operate routes from. SAS recently announced that it will operate a route to Los Angeles from Copenhagen, starting in winter 2020.

“We are very pleased and grateful for the fact that SAS has decided to place its Los Angeles route here at Copenhagen Airport. We really appreciate the collaboration with airlines like SAS on developing new routes and options for our passengers’ benefit,” said Woldbye.