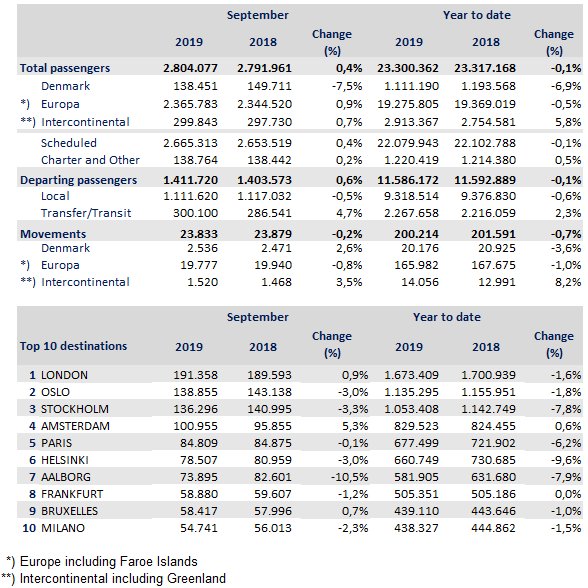 The number of passengers at Copenhagen Airport grew by 0.4% in September to 2.8 million. Driving the increase were transfer passengers, not least from Poland, flying via Copenhagen to their final destinations.

With no less than 2,804,077 air travellers, this September became the busiest ever for Copenhagen Airport.

While the number of passengers flying direct from Copenhagen fell by 0.5%, September saw an increase of 4.7% in the number of transfer passengers choosing to fly to and from northern Europe via Copenhagen en route to their final destinations. Overall, passenger numbers were up by 0.4% for the month.

“More passengers choosing to fly via Copenhagen rather than via Amsterdam, Frankfurt or London strengthens our position as the key hub of northern Europe. In September alone, 600,000 transfer passengers travelled via Copenhagen. That’s an increase of 4.7%,” said Thomas Woldbye, CEO of Copenhagen Airports.

Busy airway to Poland
The fastest riser of the month is not in the Top 10 of destinations, but Poland is quickly moving up the overall list. In September, traffic between Copenhagen and the six Polish destinations grew by 21%, or by 76,000 passengers. That means Poland has surpassed Greece and is now number 15 on the list of destination countries.

Services from Copenhagen include SAS to Gdansk, Szczecin, Wroclaw and Poznan, SAS and LOT to Warsaw and SAS, Norwegian and Ryanair to Krakow.

“With six destinations in Poland and 507,000 passengers in 2019 so far, air traffic between Denmark and Poland has become quite dense. A total of 38% of the passengers on the six routes in and out of Poland transfer in Copenhagen. In other words, the Polish market has helped to strengthen Copenhagen Airport’s position as a northern European hub,” said Woldbye.

Fine underlying growth this year
A total of 23,300,362 passengers passed through the terminals during the first nine months of the year, a mere 17,000 short of last year’s record.

“We may not have had traffic growth in the first nine months of the year, but that is mainly due to the bankruptcies of Primera Air and WOW, the strike among SAS pilots and Norwegian’s new strategy of putting profitability ahead of traffic growth.  When adjusted for these factors, we see a fine underlying traffic improvement," said Woldbye.