Seven million passengers at Copenhagen Airport over the summer

The summer holidays are over for most people. For Copenhagen Airport, it has been three busy summer months with 7,000,376 passengers in June, July and August. In August alone, 2,328,339 traveled to and from Copenhagen Airport. This corresponds to eight out of 10 passengers remaining after corona.

"It has been a busy summer at Copenhagen Airport, and it has been great to experience the terminals full of life and holiday-happy travelers. It is clear that there are many who have longed to get out and travel again, and most are then also set off towards the southern sun", says commercial director Peter Krogsgaard.

More travelers to Greece and Turkey

It is primarily the European routes that are heading towards the same level as before corona. Spain tops the list of most popular countries. During the three summer months, 668,516 passengers traveled between Copenhagen Airport and Spain, which is just over three percent fewer than in 2019 before the pandemic.

On the other hand, there are more people who have chosen to travel towards the sun and summer in Greece and Turkey. The two countries are experiencing an increase in the number of passengers of 10 and 11 percent respectively compared to 2019. 415,500 passengers traveled between CPH and Greek destinations, while 398,488 passengers traveled to and from Turkey during June, July and August.

The summer has been busy in European airports. Across Europe, travelers have returned faster than expected, and the shortage of staff at both airlines and airports has challenged the entire industry.

"The first busy summer since corona caused quite a few challenges with baggage handling and longer waiting times at most European airports. We got the man up and running as quickly as possible, and when all is said and done, things have gone well at Copenhagen Airport, and the vast majority passengers have departed as planned", says commercial director Peter Krogsgaard. 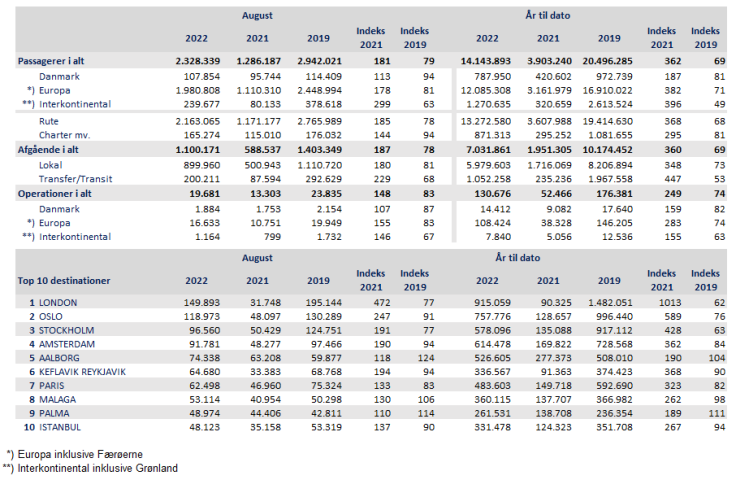 “has written New direct route from Copenhagen to Bordeaux”