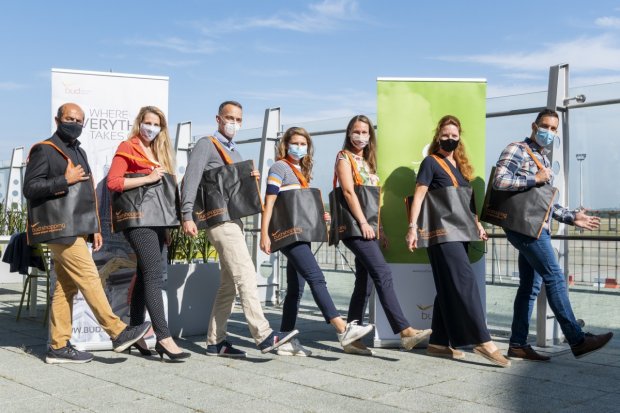 The TRMarketplace international travel retail awards, held in the form of an online forum, featured a new category, best green initiative at an airport, for the first time this year. The new accolade was awarded to Budapest Airport, for environmentally friendly shopping bags provided to customers free of charge.

TRBusiness, one of the world’s premier travel retail magazines, organized the TRMarketplace, a digital forum for the travel retail sector for the third time this year, handing out awards in 21 categories, based on feedback from consumers and bloggers. Awards are decided using an extensive database from m1nd-set, a leading research agency, on the basis of votes from approximately five thousand consumers, international travel bloggers and vloggers. Budapest Airport emerged victorious in a new category introduced by TRMarketplace for the first time this year, best green initiative at an airport, for environmentally friendly shopping bags provided to customers free of charge.

Together with its retail partners, Budapest Airport is continuously working for a “greener” airport. In August, the company initiated the elimination of plastic straws at the retail outlets operating at the airport, and, to further reduce plastic waste, installed 11 drinking fountains at the terminals, where passengers have access to excellent quality drinking water without having to buy bottled mineral water.

Dr Rolf Schnitzler, CEO of Budapest Airport explained: “We at Budapest Airport pay special attention to sustainable operation and to mitigating the environmental impacts of our operation. We have launched the Greenairport Program to work on sustainability initiatives with partners, firms and authorities operating at the airport. As a result, Budapest Airport was certified carbon neutral for the third time this year, as part of ACI’s airport carbon accreditation scheme.” Over the last five years, Budapest Airport managed to reduce carbon dioxide emissions per passenger by 49% and drinking water consumption per passenger by 30%. Budapest Airport’s waste recycling rate is exceedingly high, 70%, and the company also places great focus on developing transportation. It encourages the use of electric vehicles and is installing e-chargers, whereby aircraft will be handled almost completely with electric vehicles by 2025. The airport operator has also joined ACI’s NetZero by 2050 program.