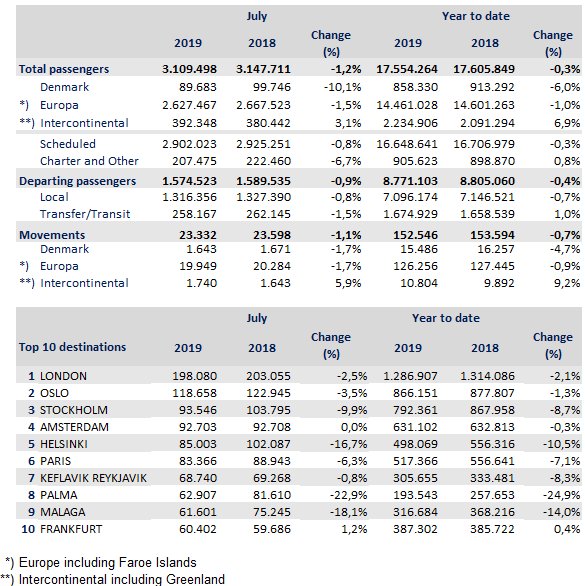 With 3.1 million passengers travelling through Copenhagen Airport in July, the airport was very close to breaking the all-time record set last year. Eighty-seven per cent of passengers are satisfied or very satisfied with the airport. That is a record.

The flow of summer travellers turned at Copenhagen Airport in July with tens of thousands returning from their holidays every day. A total of 3,109,498 travellers passed through the terminals in the busy summer month, which was only 38,213 short of last year’s all-time record.

“We had a very busy month in July – first with the many travellers leaving for their holiday destinations and now with many of them returning from holiday. This resulted in 14 days during the month with more than 100,000 passengers passing through the terminals,” said Thomas Woldbye, CEO of Copenhagen Airport.

Record high satisfaction
And the passengers are satisfied with their passage through the airport, according to the new international Airport Service Quality (ASQ*) satisfaction survey, which is conducted at more than 350 airports all over the world.

The rate of satisfaction for the first six months of the year at Copenhagen Airport grew significantly from 80% to 87% of travellers who were satisfied or very satisfied with service levels, facilities and the passage through the airport.

“In a busy summer season, a record-high passenger satisfaction rate is a well-deserved pat on the shoulder to all of our staff, from check-in, cleaning services, security, baggage handling, passport control to customer services as well as to the stores in the terminals,” said Thomas Woldbye.

More space and facilities for passengers
He also sees the passenger satisfaction rates as an acknowledgement of all the improvements the airport has implemented in recent years. He continues:

“We now have twice as much space in security, we have more space in the terminals, more shops and restaurants, a walkway directly from the metro to security, and very soon we will have a new outdoor area outside the airport with seating areas and a playground, said Thomas Woldbye.

The airport is currently investing more than DKK 2 billion annually in creating the airport of the future, which will offer travellers, airlines and the more than 700 businesses in the area more space and improved services. The many large construction works in the busy areas of the airport have influenced the passenger experience at the airport, but most of the building site walls have now been removed, and satisfaction rates are on the rise.

The perception of the atmosphere as cosy and relaxed, for example, has risen from 70% to 76%. The experience of the cleanliness at the terminals is also at the level it was on before the large construction projects began. Now, 79% of passengers are satisfied or very satisfied.

The weather matters
During the first two summer months, a total of 6,052,386 passengers passed through the airport, bringing the year-to-date figure for passengers travelling to and from Copenhagen Airport to 17,554,264. That is 0.3% fewer than in the same period last year.

One explanation for the stagnation in passenger numbers is the bankruptcy of Primera Air and WOW Air, carriers with many charter services and scheduled flights. Evidently, the other airlines operating flights on the same routes have not picked up all of Primera Air’s passengers.

The weather also has an impact on the desire to travel. July 2017, for example, was not very summer-like with a total of 267 millimetres of rain, 42% more than the normal precipitation levels. The next summer, in July 2018, the number of travellers rose by 4.5%, but they missed out on the sunniest and warmest summer in Denmark in living memory.

In relation to domestic flights, the airlines have reduced the number of departures and arrivals by 1.7%, The number of domestic travellers is down by 10.1% overall to 89,683.

*ASQ is measured on a scale of five as the percentage of passengers rating CPH as 4: Very Good or 5: Excellent