New generation A350 lifts off from Copenhagen! 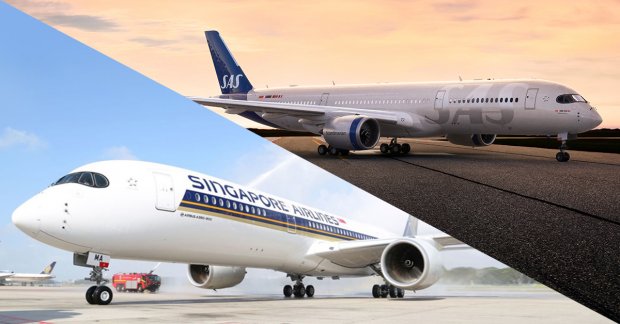 Singapore Airlines and SAS have introduced the new aircraft A350 in CPH, which will be operated on long-haul routes including Copenhagen-Singapore and Copenhagen-Chicago. One of the most modern and environmentally friendly aircraft on the market, the A350 is part of a growing move towards sustainability for the aviation industry.

Singapore Airlines and SAS are the latest airlines to begin serving long-haul routes out of Copenhagen with the new Airbus A350. Cathay Pacific operated Copenhagen-Hong Kong with an A350 over summer 2018, while Qatar Airways used the A350 on their Copenhagen-Doha route in summer 2019.

Daily departures to Singapore on the A350

Singapore Airlines have started serving its Copenhagen-Singapore route with an Airbus A350, replacing the B777-300 ER. From 2nd January 2020, the airline will be increasing the flights from five weekly departures to daily.

“We are very pleased to welcome the Airbus A350 to Copenhagen. With the new A350 on the Copenhagen route, all our flights from the Nordic countries are served by one of the most environmentally friendly aircrafts on the market,” says Erwin Widjaja, General Manager for Singapore Airlines Nordics.

"The Nordic market is extremely important to us, and by introducing a new aircraft and increasing the frequency, we can give our customers even better opportunities to travel quickly and conveniently to Southeast Asia, Australia and New Zealand," says Erwin Widjaja.

On 28th January 2020, the first of eight new SAS Airbus A350 will officially enter into long-haul service between Copenhagen and Chicago, one of the most popular SAS routes. The A350 will be based at the SAS hub at Copenhagen Airport and will operate on seven routes during the first year, including Chicago, Beijing, New York, Tokyo, Shanghai, Hong Kong and San Francisco.

“We will shorten the distance from Scandinavia to cultures and important markets by serving worldwide destinations in an efficient and comfortable way. We look forward to welcoming our passengers on board this state-of the-art aircraft,” says Karl Sandlund, SAS Executive Vice President Commercial.

“Our new fleet is incredibly well suited to Scandinavian travel patterns and tailored to meet market demands. This new aircraft will strengthen our customer offering,” he says.

The A350 is one of the most modern and environmentally friendly aircraft on the market. It lowers CO2 emissions by approximately 30% and reduces external noise footprint by up to 40% compared to previous generation aircraft.

Upgrading its fleet is a key part of SAS’s sustainability strategy. By 2030, SAS aims to have reduced CO2 emissions by 25% compared with 2005 and reduce noise by 50% compared with 2010 among other targets. At the airline’s launch event in December, guests could take a tour of the new aircraft and learn more in talks with SAS and Airbus. Among the 700 attendees were special guests from the airport’s neighbourhood. The quieter aircraft will help lower noise emissions in the area.

Singapore Airlines also gave a taste of its sustainability initiatives at its launch event in November. As part of its ‘Food to plane’ strategy, the airline has partnered with Skarø Ice cream, Friis-Holm Chocolate and Sønderhaven dairy to delight passengers with high quality, locally sourced and sustainable food onboard. The more than 100 guests were able to sample these Danish delicacies as they explored the event’s stand on sustainability and heard the airline explain more about the initiative.

“At Copenhagen Airport, we want to contribute to the transformation of the aviation industry in a more sustainable direction,” says Thomas Woldbye, CEO of Copenhagen Airport. “For this reason, we have just recently launched an updated masterplan for the airport, which accommodates space for bigger and more climate efficient airplanes such as the A350 and future generations.”

“It is a high priority for us to support the airlines' transition to more climate-friendly aircrafts while also driving an efficient airport operation. This must be achieved through innovative thinking, strong partnerships and investments in new green infrastructure and technology, so that we can jointly ensure the sustainable development of the entire aviation industry,”