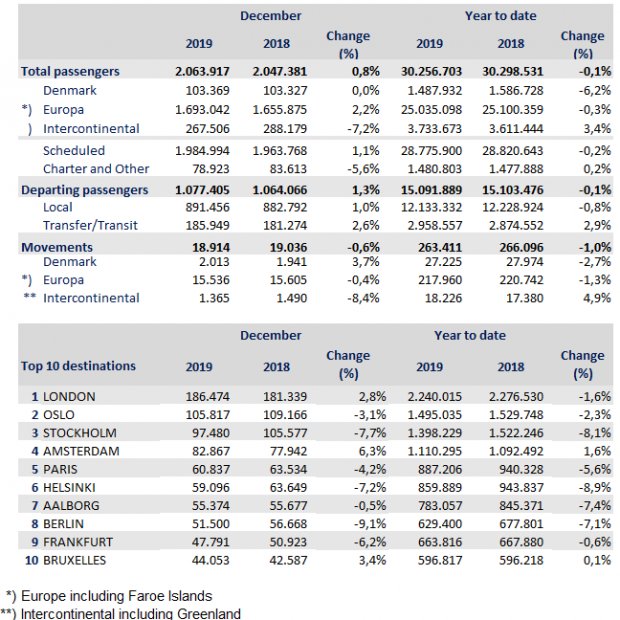 With close to 30.3 million passengers in 2019, Copenhagen Airport matched the previous traffic record set in 2018. The year also produced the busiest travel day ever at the airport and a significant riser among popular destinations. Passenger numbers in December grew by 0.8 per cent year on year.

“This was a busy year, as we had 47 days with more than 100,000 travellers passing through the terminals. Just a few years ago, 100,000-passenger days were a big event. Today, it’s ‘just’ a really busy travel day which the various staff at the airport have learned to handle really well, whether they work at check-in, security, boarding and passport control or in cleaning services, passenger services and baggage handling,” says Thomas Woldbye, CEO of Copenhagen Airport.

Another record matched in 2019 was the busiest travel day ever in the airport’s history. On Friday 28 June, a total of 109,408 air travellers passed through the airport, eclipsing the previous record set on 25 June 2018 by a mere nine passengers.

The main reasons why passenger numbers did not increase in 2019 were the adjustments made to Norwegian’s traffic programme, the bankruptcies of Primera Air and WOW Air, and the strike by SAS pilots. Overall, these three events cost Copenhagen Airport about one million passengers.

“Despite the loss of close to a million passengers, we still performed very well, ending the year at largely the same passenger total as in the record-breaking year of 2018. This reflects underlying growth for the airlines serving the airport,” says Woldbye.

Transfer traffic continued to grow in 2019. The number of passengers flying via Copenhagen was up by 2.9 per cent to almost 3 million.

As for the top destinations, London easily retained the top spot on the year’s Top 10 with 2.2 million travellers.

Outside the Top 10, Vienna was the fastest riser in 2019 after Ryanair-controlled Austrian airline Lauda Air began operating the route to Copenhagen in October 2018. The Austrian capital took a big jump from 21st place two years ago to 14th in 2019.

“Austrian and Lauda have increased their weekly departures and arrivals on the Vienna–Copenhagen route from around 50 to 70. More travel options mean more travellers, so passenger numbers on the route have ballooned – in 2019, they were up by 25 per cent to almost 450,000 passengers,” Woldbye explains.

The final month of the year also saw growth at Copenhagen Airport. The December passenger numbers marked an increase of 0.8 per cent year on year, driven in particular by a 2.6 per cent improvement in transfer traffic relative to last year.