First A350 In Ireland Lands At Dublin Airport 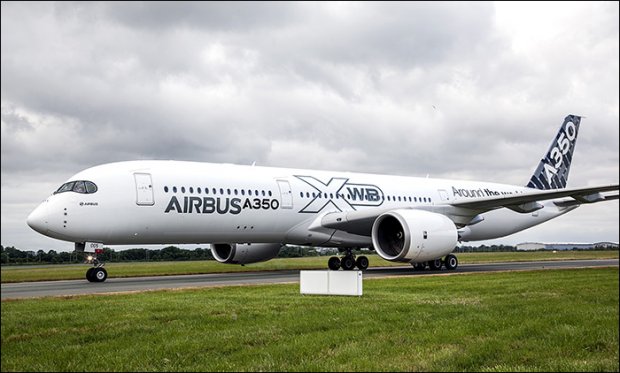 The first Airbus A350 to touch down in Ireland landed at Dublin Airport today to mark the creation of 100 jobs at aircraft leasing company AerCap.

The huge A350 XWB was escorted to its stand by two Dublin Airport Fire Service tenders following its arrival from Toulouse.

AerCap is the global leader in aircraft leasing with 1,300 owned and managed aircraft in its current fleet and a portfolio of 470 high-demand, fuel-efficient aircraft on order. Its aircraft are leased to 200 customers in 90 countries.

The new Airbus A350 XWB will form part of the company’s core fleet in the coming years.

The 100 highly skilled jobs have already been created across various disciplines including sales and marketing, aircraft technical, legal, contracts management, finance and treasury.

The Minister for Jobs, Enterprise and Innovation Richard Bruton TD said aircraft leasing was a key sector which the government had targeted as part of its Action Plan for Jobs. In recent years there had been a strong jobs performance in this area.

He described the new jobs at AerCap as “another great boost for this sector".

“Through our people, suppliers and providers of technical support we contribute over $100 million to the Irish economy each year.”

Said Transport Minister Paschal Donohoe: “As Ireland's position as a base for aviation services continues to strengthen, we are seeing companies such as AerCap further develop and grow.

“The delivery of such high end jobs is really good news for us and the government is committed to restoring the country to full employment by 2018 and ensuring that all aspects of the economy perform to the best of its ability.”

IDA CEO Martin Shanahan said that seeing the A350 XWB here in Dublin “gives us a sense of the sheer scale of the business that AerCap manage from their offices in Dublin and Shannon.”