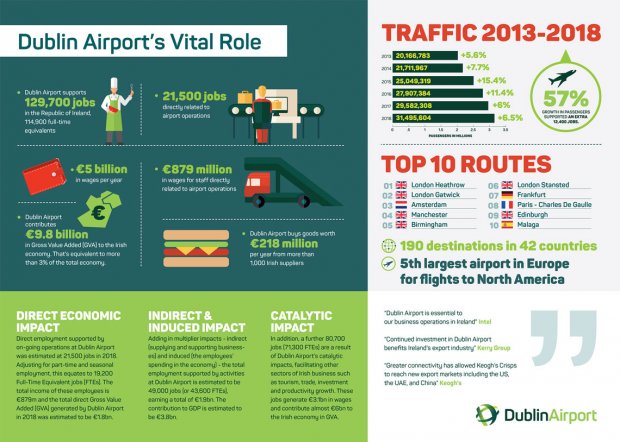 Dublin Airport supports or facilitates almost 130,000 jobs in the Republic of Ireland, according to a new study of the airport’s overall economic impact.

The study, which was undertaken by economic consultants InterVISTAS, also found that Dublin Airport contributes a total of €9.8 billion in Gross Value Added (GVA) to the Irish economy, which is equivalent to more than 3% of the national economy.

The study reveals that the 57% growth in Dublin Airport’s passenger numbers between 2013 and 2018 supported and facilitated an additional 12,400 jobs during that period.

The InterVISTAS study measures the overall economic impact of Dublin Airport and considers areas such as employment levels, the wages of the people employed in airport-related activities, and the indirect benefits that flow into the wider Irish economy.

A total of 129,700 jobs are generated and facilitated by Dublin Airport, including about 21,500 jobs that are directly related to the airport operation in areas such as airport security, airline operations, ground handling firms, immigration, customs and air traffic control.

The increase in Dublin Airport’s passenger numbers from 20.1m in 2013 to 31.5 million in 2018 boosted the airport’s direct employment levels by 5,800 jobs during the same period.

The study found that Dublin Airport spends an average of €218 million per year with more than 1,000 separate Irish suppliers. That spending level purely relates to procurement by daa directly and does not take account of spending by other airport-based companies.

Moscow’s Sheremetyevo Airport saw the largest increase in connectivity during the period, while Dublin’s expansion was greater than other airports such as Helsinki, Amsterdam Schiphol, Lisbon and Barcelona. In 2018, Dublin Airport welcomed 31.5 million passengers and had services to more than 190 destinations in 42 countries.

“Connectivity is hugely important for Ireland, as it is one of the world’s most open economies,” according to Mr Harrison. “Exports, foreign direct investment and tourism all play a major role in the Irish economy and research has shown that the value of exports with well-connected countries is typically five to six times more than that between countries that are poorly connected.”

Dublin Airport’s connectivity is boosted in part by its growing position as a hub for travel between Europe and North America. The steady flow of transfer traffic in each direction improves the viability of new routes and additional frequencies from Dublin to destinations in Europe and North America. This in turn provides greater choice for business and leisure passengers travelling to and from Ireland.

The growth of Dublin Airport as an international hub has helped move it into the top tier of European airports in terms of overall size. This hub business would be lost to Ireland if it did not come to Dublin Airport, as no other airport on the island has the route network to be a gateway between Europe and North America.

The new economic impact study also includes contributions from companies such as Amazon Web Services, Intel, Kingspan and Kerry Group, outlining how important Dublin Airport is to their respective businesses.

Intel said that “Dublin Airport is essential to our business operations in Ireland,” while Kerry Group noted that “continued investment in Dublin Airport benefits Ireland’s export industry”. Kingspan said that travel flexibility is so crucial to its business that it now “leases an office at Dublin Airport for the convenience of our global staff”.

A study of 625 businesses in five countries by trade association IATA found that 25% of sales of the firms in question were dependent on good air transport links, while another study has found that a 10% increase in intercontinental air services increases the number of large companies choosing to base headquarters operations in the city in question by 4%

The InterVISTAS study used a combination of direct data from businesses based in and around the Dublin Airport campus and applied an indirect economic multiplier that is based on a model of the Irish economy maintained by the Central Statistics Office. The wider economic benefits of the airport were estimated by using methodologies that matched a recent study on the economic impact of 40 European airports that was undertaken by InterVISTAS on behalf of ACI Europe.