Fly to the acropolis with Aegean Airlines 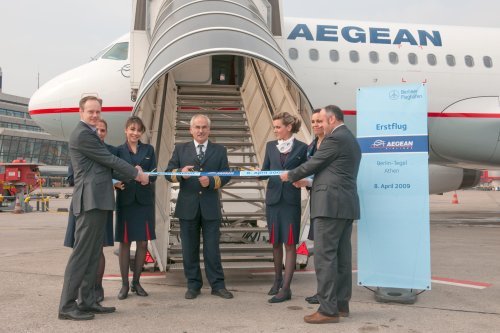 Attention all lovers of Greece: as of 8 April, the Greek airline Aegean will be operating six flights a week from Berlin to Athens. Besides being the ideal starting point for journeys to the Greek Islands, art and culture fans will find many places of interest in the Greek capital.

"We are looking forward to strengthening our presence on the German market, which we already serve with flights to Frankfurt, Munich, Düsseldorf and Stuttgart", said Dimitris Gerogiannis, Managing Director of Aegean Airlines. "I am delighted that we have finally added the German capital to our European flight schedule, too."

Dr. Rainer Schwarz, CEO of Berlin Airports: "Thanks to Aegean Airlines, Berlin is even better connected to the Greek capital. Although Athens has been a top holiday destination for years, more and more business fliers are now using the route of Lufthansa's partner, too.

Aegean flies daily, except Thursdays, from Berlin to Athens. Flights from Berlin-Tegel depart at 11.40 a.m., landing in Athens at 3.20 p.m. The airline departs from Athens at 8.45 a.m. and lands in Berlin-Tegel at 10.50 a.m. Airbus 320s are operated on this route.

The private Greek airline Aegean Airlines was established in 1997. Initially only an inland carrier, Aegean established itself on the international market in 2001 with the takeover of Cronus Airlines. The airline has already received numerous awards from the ERA (European Regions Airline Association) for its high rate of punctuality and high safety standards.