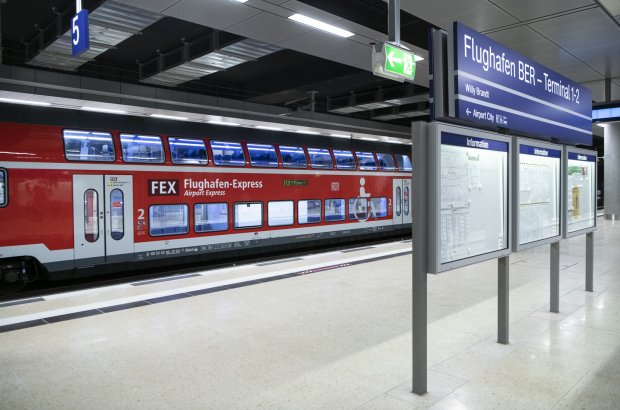 With today’s opening of the station “Flughafen BER – Terminal 1-2”, BER is now connected to the railway network. The airport is well connected to the public transport network, allowing for convenient, fast and environmentally friendly access.
The new station is located directly under Terminal 1 on level U2. Thanks to this unique design and the particularly short walking distances, passengers arriving and departing at BER benefit from direct access to trains and S-Bahn services under the terminal. The six-track station with three platforms is designed to handle up to 125,000 passengers per day and ensures the smooth arrival and departure for passengers and employees. It is expected that a total of two out of three travellers will arrive at the new airport by public transport.

Engelbert Lütke Daldrup, CEO of Flughafen Berlin Brandenburg GmbH: “We are delighted that the airport railway station is going into operation today and would like to take this opportunity to thank our partners for close, constructive and solution-oriented collaboration even in difficult times. With its efficient railway station directly under Terminal 1, BER boast an important unique selling point compared to all other major German airports. The ability to take a lift from the platform directly to the check-in hall is a unique feature in Germany. BER is a train-friendly airport that sets a benchmark for environmentally conscious travel.”

Alexander Kaczmarek, Group Representative of Deutsche Bahn for the State of Berlin: “At BER, rail and air traffic are optimally interlinked. We are delighted that the new railway station under the terminal is now in operation. It will provide convenient and environmentally friendly access to the airports for travellers reaching the airport by S-Bahn as well as on regional and long-distance trains.”

Susanne Henckel, Managing Director of Verkehrsverbund Berlin-Brandenburg (VBB): “BER will have excellent public transport connections in all directions: services include local and long-distance rail transport, S-Bahn and bus lines, as well as PlusBus and night bus lines. All of these can be travelled on under the regular VBB tariff at no extra charge. In order to ensure that the many employees of the new airport can reach their new workplace before the opening on 31 October, we are starting S-Bahn services before the official opening of the airport. With the opening of Terminal 1, the station will be completely integrated into the VBB transport network. This connection is really impressive in comparison to other major European airports.”

S-Bahn services will start a few days before the terminal opens. Initially, line S9 will run every 20 minutes from 26 October to 28 October during peak hours. Starting from 29 October, both S-Bahn services to the airport – S9 and S45 – will be in full operation, with each line operating every 20 minutes.
With the commissioning of BER, regional trains will run approximately every 15 minutes between Berlin Central Station and the airport with a journey time of about half an hour. A total of 14 trains will stop at the station every hour during rush hour, including an S-Bahn train every ten minutes and the IC service on the Dresden-Rostock route about once every two hours.

BER Airport is well connected by rail not only within the capital region, but also with the extended surrounding area up to the cruise ports on the Baltic Sea:

Terminal 5 is also connected to rail services: the former Berlin-Schönefeld Airport railway station will remain in operation under the name “Flughafen BER – Terminal 5”. There are S-Bahn train services between the two stations every 10 minutes and buses every 5 minutes.

BER Terminal 1 will open on the evening of 31 October 2020. Until then, travellers arriving at the railway station will be able to reach the so-called feeder level and leave the terminal from there.