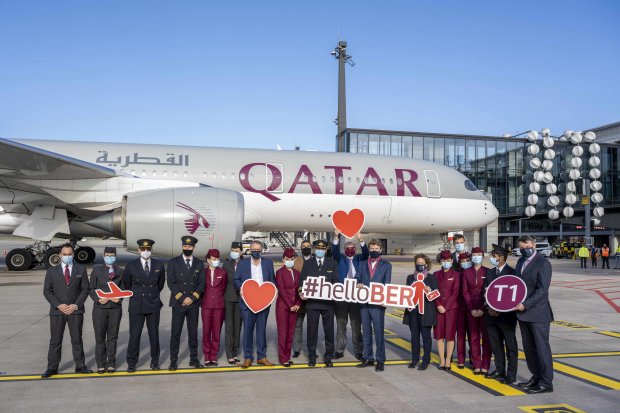 The southern runway of Berlin Brandenburg Airport Willy Brandt (BER) was opened at 9:50 a.m. on 4 November 2020 with the landing of Qatar Airways flight QR81 from Doha. The airport is now in full operation. The commissioning of the southern runway also marks the start of night flying restrictions at BER as well as of the six-month deadline for the closure of Tegel Airport.

Engelbert Lütke Daldrup, CEO, Flughafen Berlin Brandenburg GmbH: “With the southern runway, Berlin Brandenburg Airport Willy Brandt is now in full operation. The commissioning of the runway is especially significant with a view to the expansion of the intercontinental network, because in addition to a new terminal, we now also have the appropriate infrastructure to handle long-haul connections on a larger scale. At the same time, the opening of the southern runway is particularly relevant for the surrounding area: the night flying restrictions, which were adopted in 2011 and have now entered into force, provide for the appropriate, citizen-friendly compensation and regulation of the economically important flights during off-peak hours.”

Qatar Airways Group Chief Executive His Excellency Mr. Akbar Al Baker, said: “We are honoured to inaugurate the southern runway of the new Berlin Brandenburg Airport that also coincides with the 15th anniversary of Qatar Airways launching flights to Berlin. The fact that we are the first long-haul flight to land on the southern runway reflects the importance of Berlin and Germany within the Qatar Airways network. From the unique architecture to the integrated transport links and retail and food offerings, I think our passengers will be very impressed with this new airport. We are delighted to be flying to Berlin Brandenburg Airport four times a week.”

Burkhard Kieker, Managing Director, visitBerlin: “BER offers excellent conditions for the development of the intercontinental network from Berlin and eastern Germany. The interaction between low-cost carriers and long-haul airlines will play a greater role in the future than traditional airline alliances. With the help of digitalisation, BER will become a new type of hub oriented towards the needs of passengers.”

At 4,000 metres long and 60 metres wide, the southern runway can handle all passenger aircraft currently in service, including the Airbus A350-900 that operated today’s Qatar Airways flight. It is also equipped with an instrument landing system for both landing directions, which is certified for all-weather operation up to CAT IIIb, allowing aircraft movements even in very low visibility.

Around 1.1 million cubic metres of concrete were used, more than 1,125 kilometres of special cables were laid, and 212 video cameras were installed for the southern runway and the associated taxiways and stands. The concrete layer is 1.30 metres thick. The lighting system of the southern runway is made up of almost 7,000 halogen and LED lamps, of which 5,450 are in-pavement lights (at ground level) and 1,425 are surface lights. The southern runway was completed as early as in 201 and had already been used in 2015 and 2017 during the refurbishment and construction work on the northern runway of the former Schönefeld Airport.

With the opening of the southern runway, night flying restrictions now apply to BER. These prohibit regular scheduled flights during the core night-time from 0 to 5 a.m. and only allow a maximum quota of movements during the off-peak hours from 10 p.m. to midnight and from 5 a.m. to 6 a.m. In addition, the simultaneous operation of both runways at BER marks the start of the 180-day period for the closure of Tegel Airport.

BER’s two parallel runways of BER can be operated independently thanks to the lateral distance of 1,900 metres. The northern runway was previously in operation as part of the former Schönefeld Airport, the current Terminal 5 of BER. With the airport’s expansion as part of the development of the new airport of the German capital region, the current northern runway was extended from 3,000 to 3,600 metres. It is also approved for CAT IIIb.