€2.4 billion for the airport – BBI funding set up 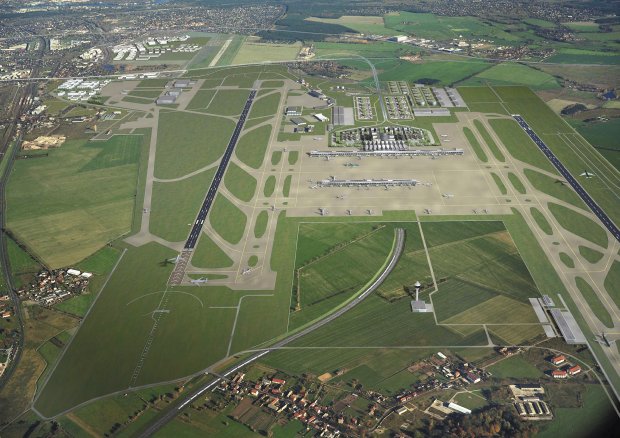 Consortium of seven German banks cooperate with the EIB to set up the biggest infrastructure financing operation in Europe / Berlin Airports raises initial capacity of BBI to 27 million passengers a year / BBI investment volume is €2.5 billion

It is currently the biggest infrastructure financing operation in all of Europe and yet another milestone in the most important project for the future of the Berlin region: Berlin Airports has just finalized the loan contracts with eight banks for the funding of the transformation of air traffic in the Berlin and Brandenburg region through the construction of the Capital Airport Berlin Brandenburg International BBI. The total amount is €2.4 billion. The largest loan provider is the European Investment Bank (EIB), which will be granting €1bn of the total amount. The KfW IPEX Bank, the Investitionsbank des Landes Brandenburg (ILB) and the Investitionsbank Berlin (IBB) are each granting €310 million to the BBI funding programme. Also involved are the Landesbank Berlin and Norddeutsche Landesbank (€150 million each), the DZ Bank (€100 million) and the Berliner Volksbank (€70 million). This funding secures all further construction phases: BBI is due to open at the end of October 2011, thus putting an end to the historic and deeply ineffective division of Berlin's air traffic into two locations, Schoenefeld Airport and Tegel Airport.

Klaus Wowereit, Governing Mayor of Berlin and Chairman of the Supervisory Board of Berlin Airports: "The BBI funding has been successfully negotiated and set up. Following the planning approval notice and the final verdict of the Federal Court of Administration, finalizing the funding contracts has been the most important step for the new capital city airport. Particularly now, faced as we are by the increasingly difficult financial and economic crisis, the successful conclusion of these negotiations at favourable market conditions is a considerable achievement."

Matthias Platzeck, Prime Minister of the State of Brandenburg: "The BBI represents a unique chance to integrate Berlin and Brandenburg in the global air traffic streams of the globalised economy. We are excellently prepared to face the future. For instance through the actual construction of the new airport: more than two thirds of the contractors building the airport are from this region. Or the funding for the new airport, where banks from Berlin and Brandenburg are playing an important role."

Wolfgang Tiefensee, Federal Minister for Transport, Building and Urban Development: "BBI is making incredible progress. Today, another key milestone has been achieved. The finalization of the long-term funding and the 100% loan guarantee provided by the federal government and the states of Berlin and Brandenburg ensures that work on BBI can progress swiftly and to plan. The entire region around the capital benefits from this. A large proportion of the €940 million worth of contracts awarded so far have gone to businesses from the region. This shows that the future capital city airport has already become one of the region's most powerful growth and employment engines, making it a highly successful example of the "Reconstruction East" strategy."

Prof. Dr. Rainer Schwarz, Chief Executive Officer of Berlin Airports: "The BBI project has really gained momentum this year. We recently passed the 1,000-day mark for the building work; we are well within all our deadlines and the funding has been finalized. Our goals are ambitious, but by 2011 the Berlin and Brandenburg region will have a high-performance, world-class airport which will enable us to position Berlin up there amongst the top ten leading aviation locations in Europe. Europe continues to suffer from substantial bottlenecks in air traffic capacity. The BBI will allow us to double the capacity currently available in Berlin and will consolidate our position in aviation, one of the key industries of the future."

Dr. Ulrich Schröder, Chairman of the Managing Board of the KfW Banking Group: "In times of financial crises it is particularly difficult to provide the kind of large-volume, long-term funding needed for most big projects. The seven banks in the consortium and the European Investment Bank EIB have granted long-term funding of €2.4 billion for the Berlin Brandenburg Airport BBI. A major factor is that the banks involved have prior experience with funding infrastructure projects. By providing the loan guarantees, the states of Berlin and Brandenburg and the federal government have shown how committed they are to this project and have made a crucial contribution to the successful conclusion of the negotiations."

Dr. Matthias Kollatz-Ahnen, Vice President of EIB: "The new Berlin Brandenburg International BBI airport is a German unity project financed by the European Investment Bank EIB. As the airport of Germany's capital and the greater Berlin-Brandenburg region, and as part of the trans-European networks, the EIB has accorded BBI particular priority. BBI will provide the necessary capacity to meet the expected growth in air traffic over the next few years. At the same time, it will concentrate air traffic in a single location outside the city, bringing environmental benefits and improving the safety of the people of Berlin and Brandenburg. We anticipate that BBI will impact positively on the economic development of other parts of eastern Germany, which as convergence regions within the EU receive particular attention from the EIB. These regions will benefit from improved accessibility by air and direct and indirect job creation. The EIB's appraisal established the project's economic viability on the basis of cautious traffic growth assumptions and taking into account the planned introduction of trading in the CO2 emissions of civil aircraft (an environmental control measure that makes air traffic more expensive). The EIB's financing of other European airports is also subject to these strict criteria. The EIB has been supporting this major project since December 2007 with a credit line whose size and maturity (€1 billion, up to 25 years) is tailored to the large scale and long useful life of the airport."

The BBI loan is divided into three segments:

The total BBI loan of €2.4 billion is secured by a full government loan guarantee provided by the airport shareholders (the Federal Republic of Germany with 26%, the states of Berlin and Brandenburg with 37% each). Berlin Airports will be paying an appropriate guarantee fee. The BBI guarantee model is compatible with the competition laws of the European Commission: on 13 May of this year, in a notification procedure the European Commission approved the loan guarantee scheme, thus enabling Berlin Airports to proceed with negotiations with the banks.

The BBI funding rests on three pillars: in addition to the total loan of €2.4 billion, the three shareholders of Berlin Airports will be contributing €430 million. This portion of the funding was also approved by the European Commission in their notification decision of 13 May 2009. The third pillar of the BBI funding is the capital provided by Berlin Airports amounting to €400 million, which will be generated through revenues in the period from 2005 to 2011. On account of Berlin Airports' stringent focus on the BBI project, by 2008 the company had already succeeded in generating 53 per cent of this amount (€250 million), which puts Berlin Airports four per cent ahead of projections.

Berlin Airports' CEO Schwarz also announced that the initial opening capacity of BBI is to be raised from 22 million to 27 million passengers. Schwarz commented: "In the past years, Berlin Airports' growth has always been well above the overall development of the German market, and even in the midst of the crisis the Berlin market continues to exhibit robust growth. We are losing fewer passengers than all other major German airports and have very successfully established ourselves in third place overall in Germany."

The BBI capacity increase will be achieved by implementing a number of additional construction measures, including extending the apron and the South Pier. Transfer conditions for passengers will be improved by including an additional intermediate level. A third taxiway between the main pier and the first satellite terminal (which will be built at a later point) will optimize aircraft movements on the ground. Berlin Airports will also be investing even more in noise protection measures for local residents. Planned investment costs for this scheme are €140 million. The capacity increase and the expansion of the noise protection measures raises the BBI investment budget to €2.5 billion.

To date, Berlin Airports has awarded contracts for BBI worth €1.5 billion. Sixty-four per cent of this volume has gone to businesses from the Berlin Brandenburg region.

The timetable is set: BBI to open at the end of October 2011

The timetable for all further work has been set: in autumn 2009 the structural steelwork for the terminal building - the centrepiece of the new airport - will commence. The topping-out ceremony for the terminal has been scheduled for spring 2010. From May 2011 the airport will be rigorously tested and put through its paces in comprehensive trial runs. The first aircraft will land here at the beginning of the winter flight schedule 2011/2012 on 30 October 2011.