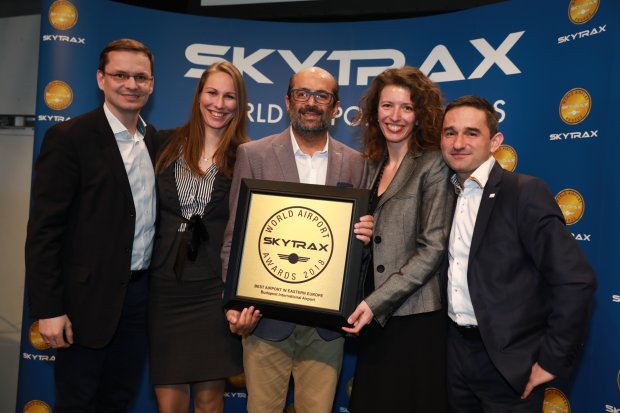 Last night, Budapest Airport was announced ‘Best Airport in the Region’ at the Skytrax World Airport Awards 2017. Voted for by passengers in the world’s largest customer survey, the Hungarian gateway has now won the prestigious title for a record fifth time, making Budapest the only Eastern European airport to maintain this top accolade for five consecutive years.
On being told of the accomplishment, Budapest Airport’s CEO, Jost Lammers enthused: “Winning the Skytrax Award five years in a row is immense encouragement to our airport community, every one of whom is committed to delivering excellent services and a memorable experience to all travellers.” He added: “I am so proud of the Budapest team for breaking the record of the most consecutive wins. It is particularly meaningful after a year which saw us welcome nearly two million additional passengers than in 2016. Not only are we holding our place among the fastest growing major airports in Europe, but we’re also being recognised for our continued promise to provide the best in all the elements which guarantee customer satisfaction.”
Presented to Kam Jandu, Budapest Airport’s CCO at the Passenger Terminal EXPO conference and exhibition in Stockholm, the ‘Best Airport in the Region Award’ acknowledges the strength of the airport’s operations, innovations and pursuit of excellence in all areas of passenger experience. Launched in 2016, the capital city airport initiated and invested in a five-year development project – the BUD:2020 programme. Key elements of this project include a 12,000m² passenger pier; check-in capacity expansion; introduction of the latest body scanning equipment; car park capacity expansions; VIP lounge; multiple upgrades to the retail and food offer; as well as finalising the conceptual development of a brand new terminal building.
Lammers concluded: “We’re devoted in creating an airport Hungary can be proud of – a premier gateway which, as a local economic generator, contributes to community.”