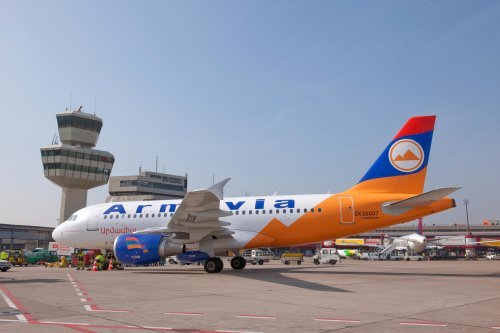 Berlin is proud to welcome a new airline: starting from today, the airline Armavia is offering a twice-weekly non-stop service from Berlin to the Armenian capital, Yerevan. Armenia has a wealth of historic and cultural attractions to offer visitors: the world's oldest Christian country is home to countless ancient churches, temples and fortified monasteries. The capital city, Yerevan, is the country's business, culture and academic centre and is also - due to the size of the city - a province in itself.

"Berlin, along with Amsterdam, Paris and Zurich, is a further attractive destination in Europe and for us it opens up a gateway to the German and northern European market", said Mikhail Bagdasarov, Managing Director of Armavia. "We are looking forward to operating our twice-weekly service between Yerevan and the German capital with our new fleet, and are confident that the new service will also enhance the appeal of Armenia as a holiday destination."

Armavia flies on Tuesdays and Fridays from Berlin to Yerevan. The flights depart from Berlin-Tegel at 12.15 hrs and arrive in Yerevan at 18.35 hrs local time. Flights from Yerevan to Berlin depart on Tuesdays and Fridays at 10.20 hrs and land at 10.30 hrs local time in Berlin-Tegel. Armavia is operating this new service with a modern Airbus A319 which seats 136 passengers. Passengers from other German cities can use Air Berlin's feeder flights to connect with their flight to Armenia from Berlin-Tegel.

Armavia Air Company LLC was founded in 1996 as the national carrier of the Republic of Armenia. In Europe, the airline operates services from Yerevan to Amsterdam, Marseille, Athens and Zurich.

All flights can also be booked via www.viaberlin.com, the portal of Berlin Airports for modern travelling from, via and to Berlin. Just a few clicks is all it takes to put together and book flights. Additional offers such as flight connection insurance, transfer services and cultural and events tips on Berlin round off viaberlin.