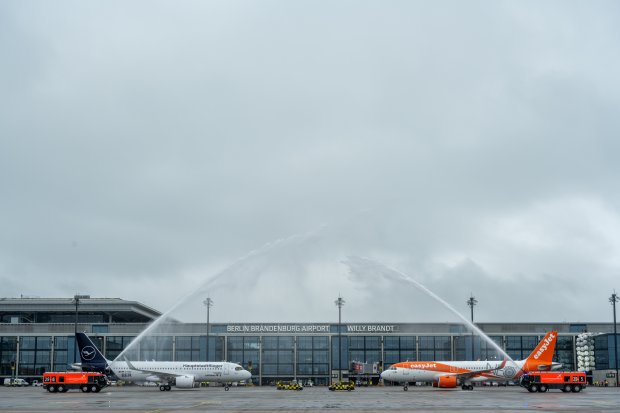 The new Terminal 1 at Berlin Brandenburg Airport Willy Brandt (BER) was opened today with the landing of the first two aircraft operated by easyJet and Lufthansa. Upon arrival, the passengers, including easyJet CEO Johan Lundgren and Lufthansa CEO Carsten Spohr, were welcomed in Terminal 1 by the head of the airport company, Engelbert Lütke Daldrup. The symbolic opening act took place in a small circle and was also attended by the Minister-President of the State of Brandenburg, Dietmar Woidke, the Governing Mayor of Berlin, Michael Müller, the Federal Minister of Transport and Digital Infrastructure, Andreas Scheuer MdB, and the Chairman of the Supervisory Board of the airport company, Rainer Bretschneider. The first commercial flights will arrive at Terminal 1 in the evening, while the first easyJet flight to London Gatwick will depart from here in the morning of 1 November.

BER boasts excellent transport links. In addition to a dedicated motorway connection, a new six-track railway station under Terminal 1 ensures direct access to rail services. The station had previously already been commissioned on 25 October 2020. It is expected that around two thirds of passengers will reach the airport by train. Numerous bus lines also connect the airport with Berlin and the surrounding area at frequent intervals.

The airport covers a total area of 1,470 hectares, the equivalent of around 2,000 football pitches. Terminals 1 and 2 are located between the two parallel runways, while Terminal 5, the former Schönefeld Airport, is in the northern area. The two runways can be operated independently. In addition to the northern runway, which has been the main runway used so far, flights will also be operated from the southern runway starting from 4 November.

The new airport concentrates all air traffic in the German capital region in one location with a total capacity of over 40 million passengers per year. Around 25 million passengers can be handled at Terminal 1. This means that sufficient capacity is available at Germany's third largest airport location. More passengers are expected to board and disembark at BER than at any other location in Germany. This modern infrastructure will allow for a significant increase in long-haul services and connecting traffic in the future.

Engelbert Lütke Daldrup, CEO, Flughafen Berlin Brandenburg GmbH: “With Berlin Brandenburg Airport Willy Brandt, eastern Germany can now rely on airport infrastructure that will serve as a solid basis for the coming decades. The people here in the German capital region had to wait a long time for this day. Our customers, that is the passengers and airlines, will find professional standards at BER: good accessibility by train and car, reliability and safety in handling even under Coronavirus conditions, optimal service on the ground and in the air. I am very pleased that we were able to open the new airport with easyJet and Lufthansa. They are our most important partners even in these difficult times. Together, we shall overcome this crisis.”

Dr. Dietmar Woidke, Minister-President of the State of Brandenburg: “I am delighted that BER is finally ready to start. I would like to thank everyone who gave their all on this final stretch. With the opening of the airport, the time has come to regain lost confidence. Now it is time to look ahead. BER will be a strong driver for economic growth and employment in the region and for the whole of eastern Germany. I am convinced that BER will live up to its role as the largest and most important infrastructure project in Brandenburg and Berlin. And I am very pleased that BER will carry the name of one of Germany’s greatest politicians and far-sighted Europeans into the world: Willy Brandt!”

Michael Müller, Governing Mayor of Berlin: “BER has gone online. For the German capital region, but especially for Berlin, this important step is associated with major changes, as Tegel Airport will close in a few days. We are very pleased that the capital city will now also offer new prospects for international connections and direct flights with this new, large airport. This is of strategic importance for Berlin as a business and tourism destination.”

Andreas Scheuer MdB, Federal Minister of Transport and Digital Infrastructure: “Today, the world is looking at BER, an airport that has been a source of great emotion for all of us in recent years. I hope that it will now quickly win the hearts of the people, just as Tegel had a firm place in the hearts of Berliners for decades. As Minister of Transport, it is my aim to see BER become an international hub.”

Rainer Bretschneider, Chairman of the Supervisory Board, Flughafen Berlin Brandenburg GmbH: “BER is open! Willy Brandt Airport is the gateway to the East and for the East. On behalf of the Supervisory Board, I would like to thank all those who have stood by us even in difficult times. Special thanks go to the employees who have kept the ageing infrastructure in Tegel and Schönefeld running. Now it is time to master the new challenges, whether in operations or in securing financing in the time of the Coronavirus.”

Johan Lundgren, CEO, easyJet plc: “At easyJet we welcome the opening of Berlin Brandenburg Airport and are proud to be the first airline to fly from BER. We remain the largest airline at the metropolitan region Berlin and an important local employer. The airport offers a much-improved customer experience for easyJet customers as we will be based in the main, new terminal – Terminal 1 – and our passengers will benefit from easier and smooth connections between flights as well as with other modes like rail. Thanks to our extensive network, we look forward to continuing to connect the vibrant city of Berlin and Brandenburg region with other major European cities and holiday destinations.”

Carsten Spohr, CEO, Deutsche Lufthansa AG: “It is of great importance for Berlin, for Brandenburg and for Germany as a whole that the capital region now has a modern and efficient airport. Willy Brandt Airport will be a true landmark not only for our capital, which as a pulsating metropolis in the heart of Europe attracts many millions of people every year. The Lufthansa Group with its airlines and business segments has been a reliable partner for Berlin, Brandenburg, and the airport for decades. We are happy to contribute to making BER a success story in aviation.”