American Airlines will once again connect Athens to New York (JFK), Chicago and Philadelphia, offering 80% more capacity in Athens than in 2019

On the 12th of April, Athens International Airport organized with American Airlines a grand Press and Trade event in the iconic King George hotel, overlooking the Acropolis and the Greek parliament.

Mr Cristian Lizana Prado, Regional Director for Europe Sales, together with American regional team, Mrs Cristina Casati and Mr Adriano Gabrielli presented to the press in Greece all latest news from the airline and the very dynamic expansion in the Greek market.

Later in the afternoon the American Airlines team, presented to the major Trade Agencies in Greece, what American has to offer to the Athenian market and the very promising trends in the Summer for Athens. 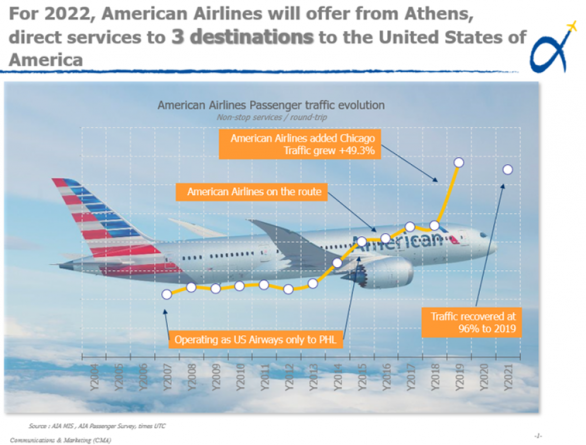 Mr Cristian Lizana Prado, stated that “This summer we are returning to Athens with our Boeing 777-200s, 787-8 and 787-9, providing our customers an elevated and more modern travel experience, complete with Business Class and Premium Economy seats, as well as state-of-the-art interiors, live TV streaming, high-speed Wi-Fi and hundreds of movies and TV shows on-demand at every seat”.

Mrs Ioanna Papadopoulou, Athens International Airport, Communications & Marketing Director stated that “The U.S. market is traditionally the most important and popular market for Athens and has demonstrated great resilience during the adverse pandemic period, driven also by the large and dynamic Greek-American community”.

We wish American a wonderful “Athenian” season and we remain totally committed to support our airline partner with its developmental plans to/from Athens.