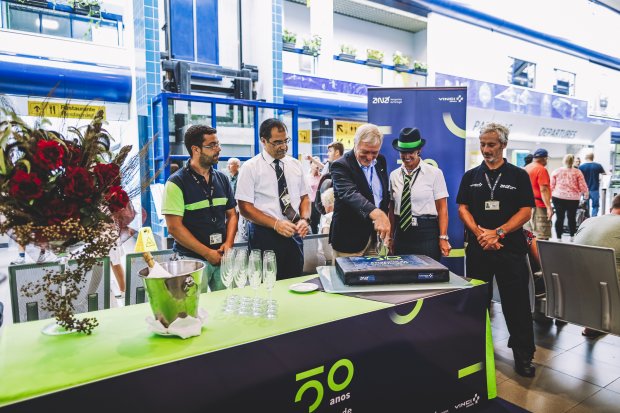 Ponta Delgada Airport associates its anniversary with the unique characteristics of the island, of the region, assuming its position as an integral part of this development.

Ponta Delgada Airport’s 50th Anniversary Campaign – “We have only changed for the better”, which was launched in mid-June, is present in the terminal, highlighting the best that exists in the Azores, from environmental balance and wilderness to regional culture and sustainable development.

Currently, and each week, 264 flights travel from this airport to 26 different destinations, including 129 between the Azores islands, 87 to the mainland (65 to Lisbon and 22 to Porto), 6 to Madeira, 19 to the United States, 7 to Canada, 3 to Cape Verde, the United Kingdom and Germany, and 7 to other European destinations.

Open to civilian air traffic under the name of Nordela Airport, in 1969, the current Ponta Delgada – John Paul II Airport is the main gateway to the Azores Archipelago, and a platform for distribution and concentration of passengers from, or going to, other island destinations.