Avinor’s hyper-connected Norwegian network of 44 airports provides efficient travel for about 50 million passengers annually (54 million in 2019), half of whom travel to and from Oslo Airport.

Avinor has taken a leading role in reducing aviation emissions and introducing sustainable aviation fuel. In 2016, Oslo Airport became the first international hub with sustainable aviation fuel available to all airlines on a commercial basis. In 2017, Oslo Airport’s Terminal 2 became the world’s first airport to receive an ´Excellent` BREEAM sustainability rating. Avinor is also a driving force behind the planned introduction of electric aircraft routes in Norway. Our vision is the electrification of all domestic air traffic in Norway by 2040.

Avinor is a wholly-owned state limited company under the Norwegian Ministry of Transport and Communications. Approximately 3,000 employees are responsible for developing and operating an efficient airport and air navigation service. Avinor is financed via airport charges and commercial sales. The company's headquarters are situated in Oslo. 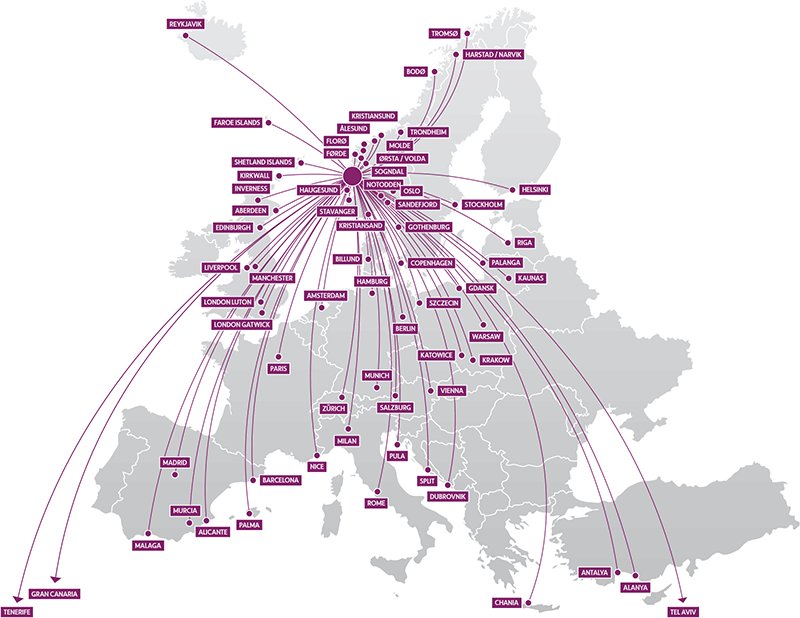 Avinor’s corporate culture is based on personal relations, openness, and humour. By being inclusive and offering a relaxed business environment, we shrink cultural barriers and create a comfort zone that makes us approachable. The same principle applies to our passenger care. Avinor’s ambition is to provide a seamless, inspiring travel experience for both Norwegian and international travellers. To achieve this, we are constantly evolving longstanding relationships with our partners such as Visit Norway, Visit Oslo and Innovation Norway.

Why Bergen? Why attend?

Make the most of your time in Bergen

Our host has put together a selection of recommended locations and activities to allow you to make the most of your stay in Bergen and ensure an effective networking experience with your industry peers.

Discover the best of Bergen for Routes Europe 2022