Qantas Airways in mid-July 2020 plans to operate 3 Boeing 747 farewell flights, scheduled to operate from Sydney on 13JUL20, Brisbane on 15JUL20 and Canberra on 17JUL20. Configuration is J58W36Y270, however Premium Economy Class is not open for sale, at time this post goes to press.

Planned operational schedule based on GDS listing as follows. In the GDS, the airline lists arrival point as ZZF. 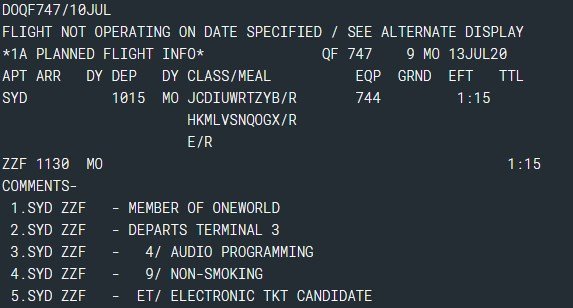 Reservation is already available at time this post goes to press via GDS, however pricing is not available for the moment. The oneWorld carrier in late-1971 introduced Boeing 747 aircraft to its operation. The following is Qantas’ Boeing 747 operational network in the 4th quarter of 1972, based on OAG International Edition, September 1972.

The airline also operates 4 weekly Boeing 747 flight on Sydney – Melbourne sector, although it does not have domestic local traffic sector.