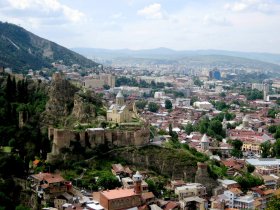 Tbilisi, formerly known as Tiflis, is the capital and the largest city of Georgia, lying on the banks of the Mtkvari River with a population of roughly 1.5 million inhabitants. Founded in the 5th century by the monarch of Georgia's ancient precursor Kingdom of Iberia, Tbilisi has since served, with intermissions, as the Georgian capital. Formerly, the city had also served as the seat of the Imperial administration of the Caucasus during the Russian rule from 1801 to 1917, the capital of the short-lived Transcaucasian Democratic Federative Republic in 1918, of the Democratic Republic of Georgia from 1918 to 1921, of the Georgian Soviet Socialist Republic from 1921 to 1991, and the Transcaucasian Socialist Federative Soviet Republic from 1922 to 1936. 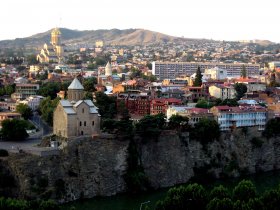 To the north, Tbilisi is bounded by the Saguramo range, to the east and south-east by the Iori plain, to the south and west by various endings (sub-ranges) of the Trialeti range. The city rises in terraces from both banks of the river Mtkvari, which is the main hydrological artery of the city. Attitude of the river bottom within the city is 200m above the sea level.

The climate of Tbilisi is transitional from humid subtropical to relatively mild continental. Average annual temperature in Tbilisi is 12,7°C. January is the coldest month with an average temperature of 0,9°C. The warmest month is July with an average temperature of 24°C and max 40°C. April and May are wet with frequent sudden heavy downpours. The climate of Tbilisi is healthy and useful.
In general, the best time to visit is from mid April through October, when days are warm or hot. The climate varies considerably from east to west. No matter when you go, be sure to take along a sweater for the cool evenings. For a three-day weather forecast in Georgia, dial weather bureau 43 95 31. Even better watch the weather report on the morning and evening TV news.

Two towers in Tbilisi look at each other across the river Mtkvari - they are Metekhi and Narikala. Even a little stone can retell about the heroic history of the city. Tbilisi, the capital of Georgia, is one of the most ancient cities of the world (until 1936 year the city was called Tiflis). Tbilisi was called so because of hot sulphur springs (Georgian "tbili" means "warm").

This surprisingly picturesque city submits at first sight. It has an image of harmonically incorporated ancient and modern times. Next to the streets, which have modern European view, with fashion buildings, beautiful shops can see narrow and winding streets, oriental alleys and little squares.

According to the archeologists the settlement of this area is dated with 3-4 centuries A.D. The earliest written reference about Tbilisi relates to the second-half of the fourth century, when Iran strengthened its political influence in the eastern part of Georgia.
During the long period Tbilisi suffered many Invasions, but still it arose from ashes. Forty times Tbilisi yielded to the devastating enemy invasions, during which its population was destroyed, kings palaces and dwellings of simple towns people were burnt, treasures plundered, the priceless monuments of Georgian culture were destroyed. But the city has never been inclined before the hordes of conquerors and each time arose from the ruins and the ashes even more excellent.