Things to do in Tbilisi

The origins of the Museum date back to the 19th century. Today, the Museum exhibits Georgia’s principal archaeological findings and thousands of artifacts of immense historical significance; animal remains dating back 40 million years, archaeological and ethnographic collections from the Paleolithic, Neolithic, Bronze, Iron and Middle Ages.

In the Old Town there is the ancient acting St. Mary Church constructed during the reign of Dacha Udzharmeli, the successor of Vakhtang Gorgasali, in the 4 th century. The beautiful rectangular building of the church was build under the influence of ancient Palestinian architecture. The doors of Anchiskhati church are decorated with traditional Georgian cross similar to the one made by St. Nino. On the western facade of the temple there is a stone medallion with the cross which has survived since the earliest version. The upper parts and arches were reconstructed in the 17 th - 19 th centuries.

Tbilisi Funicular railway was constructed to develop the uninhabited Mtatsminda plateau that overlooks the city and was opened in 1905. The railway underwent several overhauls and upgrades, the latest of which was in 2012.

Mtatsminda is the mountain topped by the 210m-high TV mast that overlooks central Tbilisi. Located 800-metres above the city Mtatsminda Park (known as Bombora) spreads over more than 1 sq km and has been a popular fun spot for generations.  Mtatsminda Park is equipped with amusement rides and a Ferris wheel it is still one of the most desirable destinations for visitors.

Funicular Restaurant’s complex is another top destination, where you can enjoy some of the best Georgian cuisine with a spectacular view over the city.

In Tbilisi vicinities you will see the amazing Botanical garden which is located in the southern part of Tbilisi in the river Tsavkisis-Tskani gorge between Tabori and Sololaki ridges and on their slopes. There you will see the blooming plants of unusual beauty, the 40 m waterfall and a little bridge across the river grown with amazing flowers.

As a fortunate turn of events, Routes Silk Road 2015 dates coincide with those of the annual rock and alternative music festival “Tbilisi Open Air”. The headline artists performing at the festival are: Placebo, Archive, Black Label Society, Beth Heart, and Zemfira. The five day (and night) festival is being held at the Tbilisi Sea (25 minutes ride from the city center) and it starts on the 3rd and continues until the 7th July. 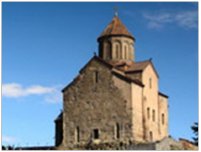 Yet another ancient monument of Tbilisi is Metekhi temple (the 12 th century) standing close to the edge of the rocky bank of the Kura which was the fortress and the residence of Georgian tsars. Under the vaults of Metekhi temple the first Georgian martyr – St. Shushanik killed by her fire worshipper husband in the 5 th century AD was buried.

Metekhi was first mentioned in the chronicles in the 13 th century. The temple was repeatedlydestroyed and restored. It suffered the most during Mongol invasion after which the first restoration took place. In the 15 th century it was destroyed again by Persians. The Georgian tsars rebuilt the temple in the 16 th – 17 th centuries. The next restoration was in the mid-19 th century; back then all the surrounding fortifications were dismantled and replaced with the prison building.

Today the tourists see the high brick structure square in plan with the round turret covered by a peaked roof in the center – the remains of the ancient fortress complex of the castle, the monastery and the temple.

Right in front of the temple stands a modern monument - a bronze equestrian statue of Vakhtang Gorgasali, the founder of the city.

The Holy Mountain Mtatsminda hosts the fragments of ancient Narikala fortress. It is the most known and ancient monument of Tbilisi 's antiquity; the townspeople call it “the heart and soul of the city”. The date of construction of the fortress is the 4 th century AD, i.e. it has been there from the city's beginning. Later the fortress was extended and expanded several times. In the 7 th - 8 th centuries it was done by Arabs. By the way, the citadel in its modern condition is a vivid example of an Arabian fortification. In the 11 th – 12 th centuries it was the Mongols' turn.

By the way, the initial name of the fortress was Shuris-Tsihe (the Enviable Fortress). And from the time of Mongolian invasion the fortress got the name Naryn Kala (from Turkic “naryn” - "small" and “kala” - "fortress"). Historians assert that Narikala standing on the Silk Road was the most fortified and impregnable of all in Tbilisi . In 1827 the fortress was destroyed by the earthquake and since then the citadel has not been restored completely. But the surviving stone towers of Narikala remain the silent witnesses of the ancient city's history. 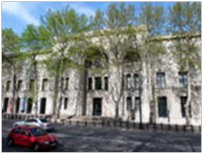 The spacious strict building is stylized to fit old Georgian architecture. Before, it was the building of the Caucasian Museum (from 1825). The museum is a unique depositary of Caucasian culture artifacts. The museum's gem – the Gold Fund contains the finds of excavations on Trialeti barrow (the 2 nd century BC). Golden and silver vessels, ceramics are collected in the fund. The gold cup decorated with jewels and a geometrical pattern gained popularity all over the world. The museum collection contains jewelry of the 5 th – 4 th centuries BC, numerous coins and weapons of Near East countries, handicraftsmen products - fabrics, carpets, clothes, magnificent woodcarving.

The Open Air Museum of Ethnography is located 3 km south-west from Tbilisi at the Turtle Lake. It was founded in 1960. As of today, one of the most visited museums in Georgia includes a collection exceeding a hundred exhibits. However, the uniqueness of this museum is that the entire exhibition of the museum represents a kind of a Georgian village where every house and every estate are a reflection of the different eras of Georgian history.

The open air museum is impressive in its beauty and diversity. You can walk for hours, studying the Georgian everyday life of all the eras and regions. One of the most famous museum "pieces" is a reconstruction of an ancient Georgian dwelling - "darbazi", which looks like a dugout. These dugouts were the place for the Georgians to hide during the Turkish attack in the Middle Ages. 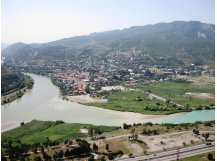 Rike park is considered to be the youngest recreational area in Tbilisi. It is situated on the left bank of the river Kura (Mtkvari) and already has become a popular place for both local and international visitors, especially families, and in summer. The Rike park is quite easy to find, as its main entrance is right from the beautiful pedestrian ‘Bridge of Peace’. The park is a host to a numerous entertainment facilities like singing and dancing fountains, artificial climbing wall, children’s maze, mega-chess board, as well as footpaths and quiet corners. The start point of a newly opened cable car that takes visitors up to Narikala fortress is located in the Rike park, as well as a number of fancy bars and restaurants.