Things to do in Kraków 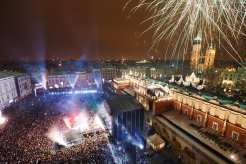 Tourists have a lot to see in Kraków: numerous monu­ments that make up the historical tissue of the city, a rich artistic and cultural life, a magical atmosphere creating numerous opportunities both for inhabitants and visitors to slow down, stand still and take a look... At the same time, Kraków may be the only city among all the well-known cultural centers where even a short visit may provide nu­merous sensations and a feeling of complete, genuine satisfaction. 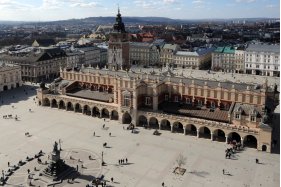 Royal Route is the oldest and most well-known tourist route. For centuries, this route has been followed by monarchs returning after victorious battles, bishops assuming office, envoys from foreign lands, and the funeral corteges of great Poles. This historic route leads from the Church of St. Florian by Plac Matejki through the Floriańska Gate. Here, inthe only well-preserved fragment of the huge defence walls, is the Arsenal – today a part of the Museum of the Czartoryski Princes. Further along, the tract leads down Floriańska Street to the Main Market Square and then along the Grodzka and Kanonicza Streets to the Royal Castle at the Wawel Hill. Walking the Royal Route when visiting Kraków is a must, yet, what a pleasant "must" it must be!

The famous Wawel Hill can be reached by the short and narrow Kanonicza Street. This is the one of the most important, oldest and most beautiful streets in Kraków. Its authentic and vibrant appearance has remained unchanged through the centuries.

The interiors of the castle feature exhibitions which are a must to see: royal chambers, a collection of eastern art and war trophies, a unique collection of Flemish tapestries, as well as archeological discoveries testifying to the more than one-thousand year presence of Christianity within the Polish lands.

The massive Sigismund bell tolls only on occasion of the most important events for the nation and the city. Half a day hardly enough for a cursory visit. Yet even if seeing the Wawel Hill was postponed unlit a future, longer visit to Kraków, it is worth a walk within the castle’s walls (the gates remain open much longer than the exhibitions) to see the rare beauty of the arcaded courtyard and the cathedral, and to take a look at the Vistula River. After walking down to the banks of the river, we see the sculpture of the Wawel dragon and the entrance to its cave – a favorite destination during family walks. Every year in June, on the occasion of Midsummer’s Eve, the traditional “Wianki” festival is held here – a huge outdoor event with prehistoric pagan origins. 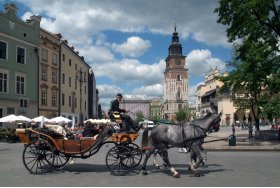 Kraków’s Main Market Square is the largest Medieval square in Europe (200 m by 200 m). Its size and authentic architectural and urban layout, preserved to this day, make it a uniqe place in the world. In 2005, Kraków’s Market Square came foremost in the first global ranking of the “Best Market Squares in the World” according to Project for Public Spaces. The Main Market Square and the network of streets that make up the Old City were set in 1257 when the city was founded. Located in the centre of the Square, the Cloth Hall (a former and present place of trade, and, for over one hundred years, the main seat and now currently one of the branches of the National Museum in Kraków), the small church of St. Adalbert (a place of important archeological discoveries), the lone tower of the town hall, which was demolished in the 19th century and is now one of the main symbols of Kraków, and St. Mary’s Church with its spired towers have survived to this day. St. Mary’s Church features the lifetime work of the Nuremburg master Veit Stoss – a monumental altar that attracts thousands of tourists daily. Many of Kraków’s legends and traditions are related to the Main Market Square, along with numerous historical events. The bugle call played every hour from one of the church’s towers refers to one of them.

One can stop at the numerous café and restaurant gardens which encircle the Square and feel the spirit of the city.

Kraków’s Kazimierz is a special place, because it has been shaped by the close neighbourhood of Christianity and Judaism lasting for several centuries. The Jews came to Kazimierz in the 2nd half of the 14th century, and till the first years of the 19th century they had lived there in the separate “Jewish town” whose limits largely followed today’s Miodowa, Św. Wawrzyńca, Wąska, Józefa and Bożego Ciała Streets. It was an autonomous enclave governed by rabbis and elected elders that recognised only the king’s supremacy held on his behalf by the Kraków voivode. 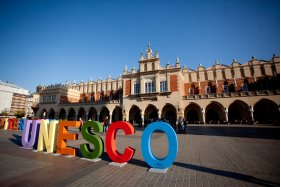 Today, Krakow is the most cultural of Polish cities. It is the interna­tional showcase of Polish histori­cal heritage, also famous as an ex­ample of successful investments, such as the new museums which have been opened in recent years (in 2010, 5 out of 10 of the most important museum events took place in Krakow), new and cur­rently constructed stadiums, the Congress Centre, the sports hall.

This impetus goes hand in hand with the development of cultural life; in recent years, Krakow's fes­tivals have become internationally recognised. "Misteria Paschalia" and "Opera Rara", "Sacrum Pro­fanum" and the "Festival of Polish Music", the "Selector Festival" and "Unsound" – a musical journey from Baroque to the 21st century, impressive and attracting audi­ences of several thousands.